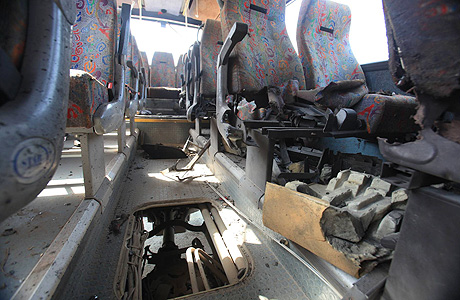 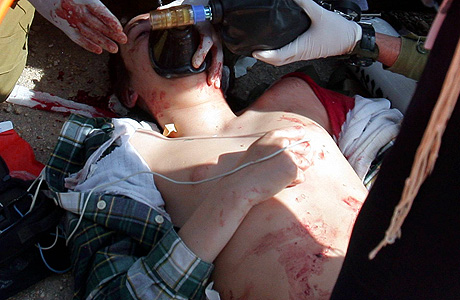 None of the mainstream media seem to be carrying these photos of the effects of an anti-tank missile fired from Gaza hitting an Israeli school bus – so we will.

This was just one of about four-dozen rockets fired into Israel from Gaza today. In any other situation, in any other county, it would be considered a barrage, and certainly an act of war. But of course it’s Israel and it is just something the world expects the Israelis to put up with.

None of this even made the news.

“What?” I hear you say incredulously, “I read about it on the BBC or in The Guardian“. Actually, what you read about was the Israeli response. The story was barely reported until after the Israelis struck back in retaliation. Then it became a story! Well, not a very widely reported one, but anyway…

Here is a cross-sample of some of the headlines:

Most of these articles mention the attack on the bus, but see how the headlines either ignore it or try to minimise the fact that attack was in response to an attack from Gaza.

So what pictures were used? Both the BBC and The Guardian (both using Reuters photos) printed pictures of the front of the bus which appears to show minimal damage – perhaps just the windows blown out:

The photo showing the actual damage – and made available with the Israeli Ministry of Foreign Affairs briefing – has not been used. Note too how photos are selected showing, not victims, not serious damage, but IDF soldiers. It’s a subtle message isn’t it?

Here is the photo showing what happens to a bus when it is hit by an anti-tank missile: 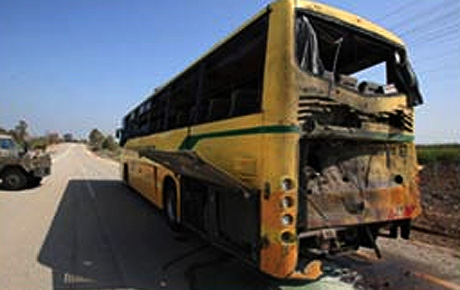 I could find nothing on the Channel4 News website about this story at all. Only the centre-right-leaning Sky News showed the bus from both angles and showed ambulance workers taking the injured away – and ran the story as a story in its own right rather than as background to the Israeli retaliatory strikes.

What have the British left been saying? Socialist Unity, with more than a passing acquaintance with Hamas: nothing. Liberal Conspiracy, who yesterday ran a column by Ben “I understand why some people are antisemites” White: nothing (perhaps after yesterday’s story, they don’t want to bore their readers with another ‘Israel’ story). Indymedia? Oh, here’s something form their regular “Palestine Today” series:

“Israeli shelling has killed one in Gaza, and injured three, on Thursday, whilst a home-made shell has struck a bus in Beer Sheva, southern Israel, critically injuring one and moderately injuring another.”

Whilst? As if these events had happened simultaneously and without any causal chain. A “home-made” shell? It was an anti-tank missile according to all reports. But see, this “The Palestinians only fight with sticks, stones and crude homemade weapons” meme needs to be nourished. A cynic might even conclude that’s why the BBC and the Guardian only printed the picture showing minimal damage.

You can guess what will follow. The retaliatory strikes into Gaza will be denounced as “disproportionate”. It will be emphasised that an “almost empty” bus was hit. The story will become about Israel.

Already the Palestinian Telegraph is setting the tone – “Israel Attacks Gaza Again” screams their headline. Like the BBC, they have a dramatic picture of an injured person being carried away.

He called on the West “to immediately intervene to stop this aggression,” the official Wafa news agency reported.

Abbas also urged Palestinian militants not to give Israel an excuse to hit Gaza. The flareup of violence followed an attack on an Israeli school bus by an anti-tank missile fired from Gaza which wounded two people.

Sharp-eyed readers will notice the double-speak: Israel’s strikes are “aggression” which the West must “stop”, and the rockets fired at Israel and bombs put on buses to provoke there responses are just “excuses” for “aggression”.

There in little interest in Hamas rockets slamming into Israeli school buses, but when enough is enough again and we see another Cast Lead, there will be wailing and gnashing of teeth in a mock-uncomprehending din from the left and liberal British media.