George Galloway has assured us that he is “no friend of Gaddafi” or his “Soprano-style family”.

Oh how times change. Here is Sabah Al-Mukhtar, whom Galloway has called his “right hand” in Viva Palestina operations, greeting Libyan regimeniks during a Viva Palestina convoy in 2009. 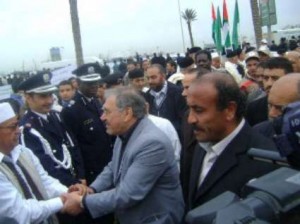 Viva Palestina is of course Galloway’s Hamas support mission. Al-Mukhtar, a former trustee of the charity, was a perfect man for the job as a 9/11 troofer and a fan of the antisemitic hoax The Protocols of the Elders of Zion.

What a magnificent passage through Libya it was, as reported by Viva Palestina itself:

***
George, who is with the convoy, said to Libya Elyoum newspaper, that it is thanks to the Gaddafi Foundation and its head Seyf El-Islam Gaddafi, that this convoy is enjoying a smooth crossing of Libya, and that he was keen to establish a partnership with this foundation to guarantee the success of the convoy.

***
The convoy is in Misurata. The hospitality of the Libyan people, government and the Gaddafi Foundation has left the convoy members in tears.

After the the public rally in Tripoli today (pictures here), they set off with an additional 60 Libyan vehicles loaded with humanitarean aid and medecine towards the coastal town of Misrata. They were met with jubilant ordinary Libyans who hold Palestine and Gaza close to their hearts.

The organisers and the Gaddafi Foundation are ensuring the smooth and safe passage of the convoy through Libya by providing everything the convoy needs – from free fuel to accomodation and repairs, etc.

***
They are in their thousands in the Green Public square of Tripoli attending a big rally to welcome the Viva Palestina humanitarian Gaza convoy. This is the first of many planned in Libya.

Ambassadors, dignitaries, representatives from the Gadaffi Foundation as well as the children of Palestine have spoken of the horrors and the tragedy of Gaza.

Gift bags containing caps, T-Shirts, books have been given to members of the convoy as a gesture of thanks and admiration for their efforts to get the aid to the destitute people of Gaza.

Up to 100 Libyan trucks are joining the convoy starting with the Tripoli contingent today including ambulances and a fire engine. The Gaddafi International Charity and Development Foundation (GICDF) is sending a considerable quantity of medical aid.

***
Leading the welcome preparations of the convoy is the Gaddafi International Charity and Development Foundation (GICDF) which said it is to join the Viva Palestina with its own convoy of medical aid.

GICDF has for over a week been contacting Libyan public and private institutions to contribute to the aid convoy and to take part in the welcoming of the members of this humanitarian mission.

***
According to the Libyan press, the Libyan Government has prepared a program full of activities for the convoy throughout its journey across the country lasting 5 days.

Update: Here is a report on the regime’s reception for Viva Palestina and Saif’s support. Kevin Ovenden, currently a Viva Palestina trustee, was well chuffed.

As the Press TV reporter says: “By now the consensus amongst the volunteers from Britain was that the Libyan government and the Gaddafi foundation had really outdone themselves in their support of the mission.”