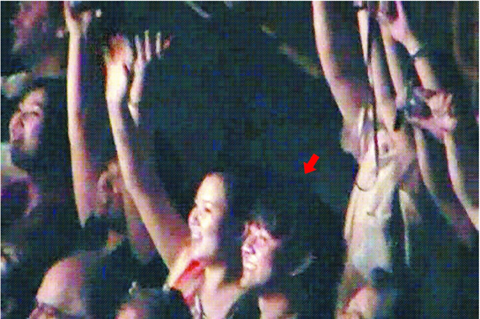 Whereas Kim Jong-il’s eldest son, Kim Jong-nam arguably put the kybosh on his chances for succession through his efforts to get into Tokyo Disneyland, a younger brother at least waited until after the wheels were put into action before nipping-off for a bit of popular culture.

Now that Kim Jong-eun has been named as heir-apparent, Kim Jong-chol evidently no longer wishes to impress daddy. Instead of staying to wish him well on his 69th birthday last month, when maybe Sussanah Clarke crooned happy birthday, fans’ photographs from Eric Clapton’s Singapore concert of all places show him in a moment of rapture.

(The above image comes from the Chosun Ilbo, which shows him with a woman believed to be his wife.)

I have not been this discombobulated since I discovered that Kim Jong-il was a fan of Daffy Duck.