Sad news, from an entertaining voice on the blogosphere:

But the blog has become a burden. It’s taking up too much time (though not as much as some might think – I am a very fast writer), it’s getting me into too many squabbles with people I have never met and are likely never to meet. And increasingly I’ve felt like I’m adopting stances simply for the sake of being confrontational and provoking a row.

Basically, the bottom line: blogging is having a negative effect on my personal, family and political life for reasons too many and complicated to recount.

I’ve allowed this blog to define me politically. It’s done the job pretty accurately – I’m acknowledged as a dyed-in-the-wool Blairite, a point that would perhaps have been open to debate had I never taken to the web. But I’ve become a blogger who is also an MP rather than a politician who blogs, and that was never the aim.

Mike Smithson from Political Betting has been speculating wildly about the reasons for Tom’s retirement: 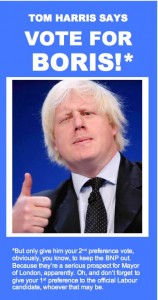 I am sure that there are other “blogging crimes” that Tom is deemed to have committed but the above spoof ad bitingly illustrated what the party’s London mayoral candidate, Ken Livingstone, did during the recent campaign for the mayoralty of Tower Hamlets.

Labour figures are not supposed to campaign against anybody other then the official party candidate and the ad was designed to take the mickey out of Ken’s “excuse” which was apparently accepted by Labour’s NEC.

Since then Ken, under grilling by Andrew Neil, has conceded that he was working against the official choice in Tower Hamlets yet one assumes that once again they’ll let Ken get away with it.

Unless something is done about Labour’s mayoral candidate then everything that Lurfur Rahman does in Tower Hamlets is now tacitly supported by the party.

It’s easy to pick off small-fry like Tom Harris but has the new leader got the bottle to take on Ken? If he hasn’t then I believe that Labour can kiss goodbye to any hope of booting Boris out in 2012 or even returning to power in 2015. It’s that serious.

In response, Tom returned from the grave to call, well … bullshit:

I just did an interview for BBC World Service who, believe it or not, wanted to discuss why I’d given up. Having thought a bit more about my reasons overnight, I said something which I didn’t mention in last night’s post: I want to see Labour win the next election and I want to make some kind of contribution to that victory, even if that contribution is simply shutting my face. As a supporter of the policies of the last Labour government, I am out of step with Ed and some of his own views – on Iraq, taxation, electoral reform, tuition fees, to name a few. As my mum used to say (actually she didn’t but she probably should have), if you can’t say something nice, don’t say anything at all.

This response was taken as an indication that I have been leant on by the party to stop the blogging. I don’t think MPs should use words like “bullshit” on a publicly available blog, and I’ve always tried to be careful not to lower the tone in such a way, so I won’t say “bullshit” now. But what a load of b******t.

But what’s provoked me to make this last and final post (honest) is Mike Smithson’s question – which I trust will feature in John Rentoul‘s ongoing and successful series of posts entitled “Questions to which the answer is no” – “Has Tom Harris fallen victim to Ed’s new assertiveness?”

Never, at any point in the whole of my blogging career – including the period when I was a minister – has anyone in the Labour Party asked me to stop blogging. Not once. The last conversation I had with EdM ended with him telling me: “Keep up the blogging.”

In fact, the only thing that could have persuaded me to keep up the blogging would have been if any senior member of the party had “instructed” me to give it up. That would have been fun.

So, no, Mike – there’s no conspiracy to gag me. The Boris Johnson poster which Mike predicted might cause me trouble has done nothing of the sort; I’ve received only congratulations from Labour parliamentary colleagues for it and for the point I was making.

Good to leave blogging on a high note then. So long Tom – we’ll miss you!

And, yes, that “Vote Boris” poster does look a little familiar. 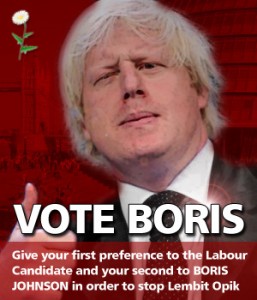