Recently, after a very pleasant evening of drinking in a pub in central London, my girlfriend and I took separate routes home. Having had no more than a half pint, I cycled off into the night whilst she braved the Number 25 bus. Braved, I say, because she found herself in rather inglorious company. Fairly shortly after getting onto the bus, she was joined by a chap called Anjem Choudary. 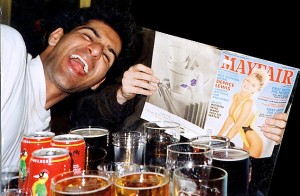 Finding herself surrounded by Andy’s goons, my lovely girlfriend texted me this message:

Anjem Choudary is on my bus. Permission to kick his ankle?

My response was that, rather than kicking his ankle, she should pinch his bum. My other (equally sensible) suggestions were:

1) Run up to him, give him an overly familiar hug and kiss and proclaim “Andy! Long time no see! Remember the good times back at Southampton? Are you still shagging that David guy?” and

2) Wander up and say “Haven’t I seen you on the tele? You’re Maajid Nawaz, aren’t you!”

Anyway, I thought I’d like to share this with Harry’s Place and see what suggestions you have for next time one or other of us has such an unfortunate encounter on the No25. That said, baiting nutters like Anjem (good clean fun) is not the same as insulting religiously observant Muslims (just rude) so, if you want to make cracks about Mohammed or flinging bacon, please exercise your right to do so elsewhere. We may well disagree with a lot that conservative Muslims believe in but, so long as they aren’t trying to impose their beliefs on anybody else, let’s live and let live.