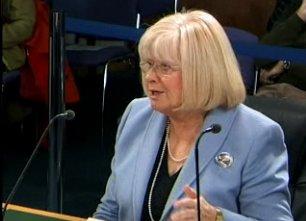 Labour MP Ann Clwyd’s testimony before the Chilcot Inquiry won’t get a fraction of the attention paid to Tony Blair’s or Clare Short’s appearances– but it deserves every bit as much.

You can watch it here (second video) or read the transcript here (pdf).

Last year I singled out her and former Labour MP Harry Barnes for caring about what happens in Iraq even when it doesn’t give them a chance to blame the US or the UK for something.

Clwyd has taken a passionate interest in the human rights of Iraqis since the 1970s, and that interest continues to this day. She first met Iraqi students who had been imprisoned and tortured through the National Union of Mineworkers. After the ouster of the Ba’ath regime in 2003, Tony Blair appointed her as the UK’s human rights envoy to Iraq. She has visited the country numerous times, before and after the 2003 invasion.

Clwyd was deeply concerned with the situation of the Kurds in northern Iraq, especially after Saddam Hussein’s poison gas attack on Halabja in 1988. Before the war she was active in INDICT, a campaign to hold Iraqi leaders accountable for their crimes.

In February 2003, before war was declared, I was on a visit with INDICT people to Kurdistan. Again, we were collecting evidence, and I was taken by the wife of the President of Iraq, Jalal Talabani. I was taken by his wife, who was in Kurdistan at the time, to the border with Iraq and Kurdistan, which is an area called Sham Shamal, and she pointed towards the hillside where there were rocket positions and she said, “That’s where they are going to fire the chemical weapons at us”, and we didn’t stay there very long. She said, “Let’s get away from here. It is dangerous to be here”, and it was then, at that time, when I saw the Kurds were fleeing from the towns, the Kurds actually were, you know, going on cars, buses, all sorts of things out of the towns into the country because they so believed that chemical weapons were going to be used against them again, and I can remember, in fact, Jalal Talabani, who was also in Kurdistan at that time, asking me to ask Tony Blair, when I returned to the UK, for chemical weapons protection suits.

Now, the Kurds had their own intelligence and, you know, when you saw women going into the market and buying piles of nappies because they thought they could put the nappies over their faces to protect them from chemical weapons, you realise that people there took the very threat seriously indeed, the threat of Saddam attacking them again.

The Kurds had never told me before that they wanted to war. I mean they had their uprisings, you know, against the regime, the Kurds in the north and the Shia in the south, but I had never ever heard them say, “We want a war”. They had tried to overthrow him — Saddam’s regime themselves, but never had anybody said, “We want a war”. But this time they said to me, “There is no other way”, and that’s the first time I ever heard the Kurds — and I have a very long association with them — say that. “There is no other way”. So when I came back and we had this debate at the beginning of February — the beginning of March — middle of February in the House of Commons, and I spoke then explaining what I had just heard and seen in Kurdistan, and I said for the first time that, you know, with INDICT over the years we had tried every way, with sanctions we had tried, but actually even that twin-track approach had not managed to move the regime. So I felt myself there was no other option. I didn’t feel that I could go back and face the Kurds and say that I had argued any other way because I couldn’t on the basis of what I had heard.

Like many others, Clwyd expressed her frustration in dealing with the seemingly clueless Americans in charge of the occupation, especially when it came to the treatment of Iraqi army officers.

Mr Bremer was in charge of the operation there and the British were there and so we talked about some of these issues. One of the first things that struck me was — because, again, because of my friendships with Iraqis, one of my Iraqi friends had [a brother who was] a General in Saddam’s army. He was now in a staff college, but he was a General, and immediately after 2003, my friend rang me up and he said, “Do you know what is happening with the military? Because there are lots of the military that my brother knows who would help the British. There are 50 to 100 senior Iraqi officers who are ready to help the coalition”.

Well, obviously, I passed that information on. But, you know, the army wasn’t there anymore, but they were queuing up in very hot weather for their pensions, for their stipends, and I discovered that the man — the brother of my friend had been queuing up every day for two weeks, and he was a senior, you know, army officer, and yet had never got to the front of the queue. He said — I spoke to him eventually, and he said to me, you know, “If they want to humiliate us, this is the way of doing it”.

She told about visiting one of Saddam’s mass graves.

[I]n 2003 they started excavating the Al-Hillah sites near Babylon, and I went there to look at what was going on because there was a UK forensics team also working there and giving assistance to the Iraqis about how to handle evidence, because — I mean, it looked like a moonscape, it was so huge, the site. They estimated — I don’t know if they’ve revised the estimates since, but there were 15,000 bodies actually buried at that site in Al-Hillah, which is near Babylon, and I thought it was a very sad way that the Iraqis had to go to those sites, because you saw elderly women — when they excavated bodies, I think they excavated several thousand in that first round — if there was no identification with the body, they would then put — or rather, if they found identification, but couldn’t identify the name of the person or persons, they would then put their possessions in a plastic bag on the top of the grave and rebury the body, and, you know, old, old women were going round these sites, looking inside these plastic bags and pulling out a watch or a ring or a piece of cloth or a lighter just to see if they could identify them, and I thought, you know, that was really a very great concern to see people having to try and identify their lost relatives in that way.

I see progress in all areas. I have always been optimistic about the future for Iraq and one of the reasons for that is I monitored the elections in Basra, the first elections, in 2005, which was, you know, a particularly joyful occasion, because people were voting for the first time, and you know, it reminded me of being in South Africa when I monitored the first elections there. People came out with their black fingers and they were waving them in the air at us saying, “There, we have voted”. There was an attack on one polling station in Basra in 2005, but apparently the women — women had turned out in great numbers, you know, about 80 per cent turned out to vote in those first elections in 2005 and there was a rocketed attack on one of those polling stations which was mainly filled with women at the time, and, apparently, they all stood there and sang and defied those people that were attacking them, and the same now for the election — for the provincial elections.

Clwyd said the Iraqis still want help from the British.

That’s why they can’t understand Inquiries like this. The Iraqis always say to me, you know — because weapons of mass destruction was Saddam — “Why are you still operating in this area? What we need is your help and your attention”, and obviously the Iraqis can pay for a lot of things themselves now, but nevertheless they appreciate the guidance that we can give them…

Speaking to the British and American families who have lost loved ones in Iraq, Clwyd said:

You know, we sat in the House of Commons as Members of Parliament feeling particularly responsible when the Prime Minister read out the names of those who had died, and you know, we all feel great sympathy for those people, but I do hope that Iraq eventually will turn out to be the kind of country that everybody can be proud of, and, of course, not just British troops, but, you know, American troops, coalition troops, civilians who have died, many, many Iraqi civilians have died. Then I can only say how sorry I am and — but I hope that, at the end of it, Iraq will be a much better country. I know Iraqis — I say this because Iraqis tell me so often. You know, they feel great sadness about people from this country who have given their lives to achieve their freedom and they certainly appreciate it.

This is just a small part of what she had to say. Watch or read it all.