A few nights ago, Charlie Brooker showed a clip of a pop-psych show, in which various people with different perspectives on social issues were wired up to a machine and shown pictures of various human subjects. Their brain activity was measured, and ‘positive’ and ‘negative’ responses to photos were displayed, graphically. One woman, who described herself as a patriotic British woman, displayed negative reactions to, for example, niqab-ed women. She was later shown saying that she didn’t think that immigration was all bad, but that she wished that people would “muck in together” more.

That is a very common reaction. People, by and large, genuinely don’t think of themselves as racist. They like the idea that everybody in this country is in the same boat, pulling together. What they react badly to, is the idea that different sections of society are opposed to, separate from, and fighting against each other.

The BNP is a neo Nazi party. Its supporters include a large number of neo Nazis, and Nazi views are broadly represented in its ranks. However, despite that, you will often hear BNP voters, members and sometimes even candidates, reject the party in disgust having discovered this fact about it. It might be stupid for them to mistake their party’s true nature, but they often do, nonetheless.

What gives the BNP strength, is entrenched and privileged sectarianism.

I remember, a few years ago, while I was pulling down BNP posters, a lady said to me:

It was telling that she was expressing her support for an extremist party, not because of what it stood for, but by reference to what other ‘groups’ were doing. In a political culture, in which parties are marketed to voters by cultural and confessional group, it is unsurprising that the BNP cleans up the disaffected white vote, by telling its constituency: “We’re the bastards who will fight your corner”.

As things stand, the level of sectarianism within our society is absolutely shocking.

Have a look at this. It is an advert for a series of meetings with political candidates, run by Friends of Al Aqsa.

Friends of Al Aqsa is a Hamas supporting campaign, run by extremists who also push material by Holocaust denier, Roger Garaudy. These guys can get away with saying and doing things that the BNP would dearly love to say and do – and they’re graced with the presence of MPs and senior ministers from all parties, including the Conservative Shadow Attorney General.

“Hamas is no terrorist organisation. The reason they hate Hamas is because they refuse to be subjugated, occupied by the Israeli state, and we salute Hamas for standing up to Israel.”
…
“…to the state of Israel: you no longer represent the Jewish people. You have no moral authority to speak for the Jewish people when thousands of Jews are against what you are doing. And finally, to the British Jewish Board of Deputies, shame on you, to work, to promote the genocide of the Palestinian people and the war crimes of the Israeli government. You do not speak for the British Jewry who today have signed in the Guardian against the Jewish government, what it is doing to the Palestinian people. Shame on the British Jewish Board of Deputies.”

Or take Azad Ali. He has basically run a libel case in which his main argument was that he supported the killing of British troops, but that the Mail had improperly characterised the scope of his jihadism. In other words, Azad Ali owned up to being a traitor, in court. 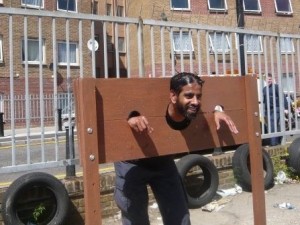 Or take the National Association of Muslim Police, who last week briefed against the Government, demanding a change in this country’s foreign and anti-terrorist policies, and rubbishing Prevent. Yet it is an integral part of ACPO’s own “Prevent” strategy. We also pointed out that the NAMP both linked to and encouraged complaints to made to the so-called Islamic Human Rights Commission, which is a transparent Khomeinist front organisation.

Have those links been removed yet? No, they haven’t. Could you imagine any police grouping with links to, say, the BNP “union”, Solidarity, surviving very long? Yet, after dictating a ‘retraction’ of its evidence, the Government confirmed that the NAMP remains its ‘key partner‘.

The most egregious examples of pandering to sectarianism of late have involved fronts for extremist Islamist organisations. However, the main parties play the same game with all confessional groups, to a greater or lesser extent. They do so because they think it will deliver dividends, which sometimes it does. It is, however, an offensive way of campaigning, and carries with it the clear message that political parties do not see voters as citizens but as categories: be it White Van Man or Colourful Ethnic. The other lesson it teaches voters is: join your confessional group, or miss out on power and influence. That is a pernicious and divisive thing to say to a nation.

It is time that it stopped.