It may have been the first speech in the long history of Nobel Peace laureates which sought to explain why war is sometimes morally justified– probably disappointing some of his supporters and surprising some of his rightwing opponents by not fitting into any of their convenient stereotypes. 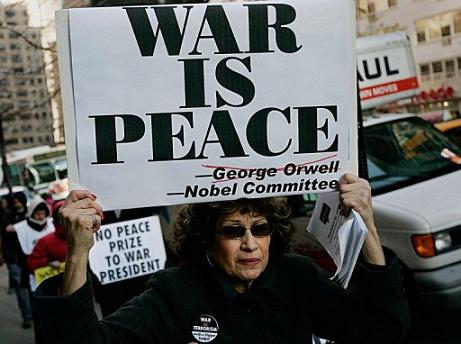 (Of course Orwell himself understood that war is sometimes necessary.)

And the Stop the War Coalition thought a devastating riposte to the speech was a simplistic anti-American video from the antisemitic Kuala Lumpur Foundation to Criminalise War. (Don’t those fools ever check their sources?)

Obama didn’t pander to any particular constituency and I doubt he achieved any political advantage from it. He simply said what he believes. In other words, good for him.

Obama touched on many of the themes we regularly discuss here at Harry’s Place, and it’s worth reading the speech in full. But I think this part struck exactly the right note:

We must begin by acknowledging the hard truth that we will not eradicate violent conflict in our lifetimes. There will be times when nations — acting individually or in concert — will find the use of force not only necessary but morally justified.

I make this statement mindful of what Martin Luther King said in this same ceremony years ago: “Violence never brings permanent peace. It solves no social problem: It merely creates new and more complicated ones.” As someone who stands here as a direct consequence of Dr. King’s life’s work, I am living testimony to the moral force of non-violence. I know there is nothing weak, nothing passive, nothing naive in the creed and lives of Gandhi and King.

But as a head of state sworn to protect and defend my nation, I cannot be guided by their examples alone. I face the world as it is, and cannot stand idle in the face of threats to the American people. For make no mistake: Evil does exist in the world. A nonviolent movement could not have halted Hitler’s armies. Negotiations cannot convince al-Qaidas leaders to lay down their arms. To say that force is sometimes necessary is not a call to cynicism — it is a recognition of history, the imperfections of man and the limits of reason.

I raise this point because in many countries there is a deep ambivalence about military action today, no matter the cause. At times, this is joined by a reflexive suspicion of America, the worlds sole military superpower.

Yet the world must remember that it was not simply international institutions — not just treaties and declarations — that brought stability to a post-World War II world. Whatever mistakes we have made, the plain fact is this: The United States of America has helped underwrite global security for more than six decades with the blood of our citizens and the strength of our arms. The service and sacrifice of our men and women in uniform has promoted peace and prosperity from Germany to Korea, and enabled democracy to take hold in places like the Balkans. We have borne this burden not because we seek to impose our will. We have done so out of enlightened self-interest — because we seek a better future for our children and grandchildren, and we believe that their lives will be better if other people’s children and grandchildren can live in freedom and prosperity.

So yes, the instruments of war do have a role to play in preserving the peace. And yet this truth must coexist with another — that no matter how justified, war promises human tragedy. The soldiers courage and sacrifice is full of glory, expressing devotion to country, to cause and to comrades in arms. But war itself is never glorious, and we must never trumpet it as such.