Human Rights Watch have posted the following message in defence of  the Nazi paraphernalia collector, Garlasco, in various forums including ours:

Several blogs and others critical of Human Rights Watch have suggested that Marc Garlasco, Human Rights Watch’s longtime senior military advisor, is a Nazi sympathizer because he collects German (as well as American) military memorabilia. This accusation is demonstrably false and fits into a campaign to deflect attention from Human Rights Watch’s rigorous and detailed reporting on violations of international human rights and humanitarian law by the Israeli government. Garlasco has co-authored several of our reports on violations of the laws of war, including in Afghanistan, Georgia, and Iraq, as well as by Israel, Hamas, and Hezbollah.

Garlasco has never held or expressed Nazi or anti-Semitic views.
Garlasco’s grandfather was conscripted into the German armed forces during the Second World War, like virtually all young German men at the time, and served as a radar operator on an anti-aircraft battery. He never joined the Nazi Party, and later became a dedicated pacifist. Meanwhile, Garlasco’s great-uncle was an American B-17 crewman, who survived many attacks by German anti-aircraft gunners.

Garlasco own family’s experience on both sides of the Second World War has led him to collect military items related to both sides, including American 8th Air Force memorabilia and German Air Force medals and other objects (not from the Nazi Party or the SS, as falsely alleged). Many military historians, and others with an academic interest in the Second World War, including former and active-duty US service members, collect memorabilia from that era.

Garlasco is the author of a monograph on the history of German Air Force and Army anti-aircraft medals and a contributor to websites that promote serious historical research into the Second World War (and which forbid hate speech). In the foreword he writes of telling his daughters that “the war was horrible and cruel, that Germany lost and for that we should be thankful.”

To imply that Garlasco’s collection is evidence of Nazi sympathies is not only absurd but an attempt to deflect attention from his deeply felt efforts to uphold the laws of war and minimize civilian suffering in wartime. These falsehoods are an affront to Garlasco and thousands of other serious military historians.

I have no particular personal insight into what makes a man obsessively collect Nazi relics. What I said a couple of days ago was this:

There are many people who are fixated with Nazidom who are not politically Nazis. They are fascinated by the forbidden. They like the style. They are drawn to that which they hate.

Then, there are the David Irvings of this world.

In any event Nazi memorabilia collectors are… an odd bunch. The odd helmet, a bullet, a fragment of shell casing: perhaps. But when it becomes a lifestyle choice, something strange is going on.

A lot of people have a terrible fascination with Nazis. The fixation stems, no doubt, from the fact that they were very well dressed and incredibly cruel.

For many people, obsessing about Nazism is part of a quest to understand how apparently civilised human beings could engage in such terrible atrocities, and on an industrial scale. I’m sure that most people have one or two books on the Nazi period, or have looked at the photographs of civilians being prepared for execution with a sort of prurient horror.

Collecting Nazi material – the uniforms, the medals, the weaponry – falls into a very different category. What does one learn from such things? What is the pleasure to be had from them?

One is reminded of the P.J.O’Rourke aphorism:

But the fascination need not be purely sexual-sadistic. Some people collect Nazi trinkets because they enjoy the transgressive nature of the hobby. If you collect this sort of stuff, it makes you a bit of a bad boy. Imagine your mum’s face when she tidies up your room only to find … your secret swastika armband!

Lemmy from Motörhead falls into this category, I think. He had a huge collection of Nazi bumph, and nearly got into terrible trouble for it in Germany, last year. 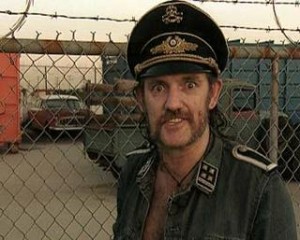 Are there people Nazis? No, mostly not. They are very very weird, however.

It goes without saying that there are serious curators of Nazi material, attached to military history institutes, who can properly be described – inthe words of the HRW release – as “serious military historians”.

Is Garlasco a “serious military historian”? Well, he has written a book on Nazi “Flak badges“. 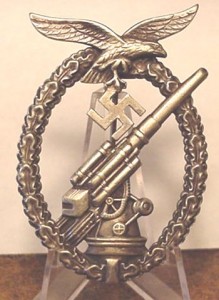 However, I’m not convinced that “serious military historians” have exchanges like this, on online forums, with fellow obsessives:

That is so cool! The leather SS jacket makes my blood go cold it is so COOL!

I find the following picture and the exchange unsettling, as well: 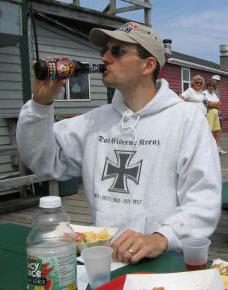 Love the sweatshirt Mark. Not one I could wear here in germany though (well I could but it would be a lot of hassle)

Everyone thinks it is a biker shirt!

Yeh, were you come from but imagine walking around in Berlin with “das Eisene Kreuz” written across your cheat. Either you get beaten to pulp by a group of rampaging Turks or the police arrest you on suspicion of being a Nazi

Spin it as you want, there is something unpleasant and unnerving about Garlasco’s focus on Israel and his fixation with Nazi iconography. The Elder of Ziyon puts it well:

It is extraordinarily bad taste and truly offensive that the same person who habitually castigates the Jewish state to a worldwide audience has a creepy obsession with the symbols of those who tried to destroy all Jews.

That’s the issue in a nutshell, really.