Boris Johnson has paid a very fluffy visit to the East London Mosque.

”That’s why I urge people, particularly during Ramadan, to find out more about Islam, increase your understanding and learning, even fast for a day with your Muslim neighbour and break your fast at the local mosque. I would be very surprised if you didn’t find that you share more in common than you thought.” 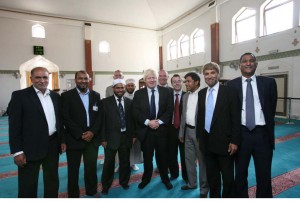 Some people find fluffiness unbearable. It doesn’t bother me much, per se. It does have its uses in politics, and some of them are legitimate and even advisable.

However, there are times and places for it, and the East London Mosque in 2009 is not among them. Actually, I would urge London’s mayor, who wants us all to learn more about Islam, to find out more about the mosque.

Its imam, Abdul Qayum, is a signatory of the pro-Hamas Istanbul declaration (pdf), the fruit of an assembly of radical Islamist clerics and Hamas leaders in Turkey in February 2009. Tolerance is most certainly not a word that springs to mind when one reads the declaration. Note that Arabs are among the enemies of the faith:

3. We affirm in full conviction that the Palestinian Authority, whose mandate is coming to an end, is not eligible to represent the Palestinian people. It stands outside the will of its people, and has given up the choice of jihad in the way of Allah Almighty as an effective means in defeating the occupation and the liberation of the Islamic holy places. It adopts the wishes of the Nation’s enemies in exchange for the illusions of false peace.

4. We affirm in full conviction that the so-called Arab peace initiative is a proven betrayal of the Islamic Nation and the Palestinian cause, and a blatant betrayal of the Palestinian people. It aims to criminalise the Resistance [muqawama] against the Zionist occupying entity in perpetuity through its de facto recognition of it, as well as the confiscation of the right of refugees to return to their homes and their property.

In fact, the net of hatred is cast far and wide, around the world:

7. The obligation of the Islamic Nation to regard everyone standing with the Zionist entity, whether countries, institutions or individuals, as providing a substantial contribution to the crimes and brutality of this entity; the position towards him is the same as towards this usurping entity.

In sermons at the mosque, Qayum himself has praised Hamas, denied that they are terrorists, cast Israel as an enemy of Allah that will be crushed, and compared Israel to Pharaoh, Genghis Khan, the crusaders, and Hitler.

Here is another: jihad loving civil servant Azad Ali’s “Easy Talk” group will hold a fundraiser for Gaza in October.

One scheduled speaker is Anas al Tikriti, who supports the murder of coalition soldiers in Iraq. His Cordoba Foundation was also a sponsor of the recent Cage Prisoners event in Kensington, London. It was to be addressed by Anwar al Awlaki, a pro-al Qaeda preacher, until the council intervened and banned Awlaki’s speech. Another scheduled speaker is Azzam “Kaboom” Tamimi.

It appears that the beneficiary of the event will be Interpal, a charity that is closely linked to Hamas.

Here’s a look at the real face of Hamas:

“Talk about the holocaust and the execution of the Jews contradicts and is against our culture, our principles, our traditions, values, heritage and religion,” Jamila al-Shanti, a Hamas legislative official, said in a statement distributed Tuesday after a meeting among elected leaders of the radical Islamist group and the head of the Hamas-run Education Ministry in Gaza.

Hamas Education Minister Muhammad Askol used similar language in criticizing the U.N. Relief and Works Agency, or UNRWA, saying it was not respecting Hamas’s “sovereignty” over Gaza. He said he planned to ask for a meeting with agency officials to “assure the necessary coordination.”

His remarks came a day after Hamas spiritual leader Yunis al-Astal said teaching children about the murder of 6 million Jews during World War II would be “marketing a lie.” He characterized the possible introduction of the subject into Gaza schools as a “war crime.”

These are the disgusting antisemitic politics which find backing in the East London Mosque and the London Muslim Centre.