Sid has an worth reading post up at Pickled Politics, in which he discloses the Chair of the Green Crescent charity, Sadek Hamid, writes for the Guardian’s Comment is Free. 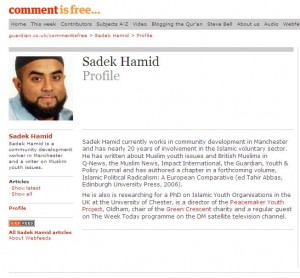 But I hope this does not stop the Guardian giving space to extremists to disseminate their ideology with op-eds on its pages. Of course, we all know it won’t.

There then follows an interesting discussion between Sid and  Sunny, who says:

The cheap shot at the Guardian is unwarranted though. Before the raid happened, it wasn’t clear whether Green Crescent was doing this stuff.

Saying that, CIF also has plenty of apologists for Israeli aggression, so I don’t see why it should restrict the voices of just Muslim nutjobs.

However, what *is* a cheap shot is making the false link between Southasian Islamist extremism and “apologists for Israeli aggression”.

This is exactly the kind of justification that Islamists (and their liberal apologists) propagate. By using this false linkage between Israeli aggression and terrorism in Bangladesh is doing their job for them.

right – so we would both like to see less of both?

To which Sid answers:

We would. And we would also like to see fewer liberals and Islamists make the causative link between the two.

Because the implication seems to be that CIF should ban Islamists from CIF because we don’t agree with their views.
I want to make sure that people have consistent standards when they ask for something. There’s far too many people, for example, who stand up for free speech when its cussing Muslims, but are curiously silent when its Muslims who are shut down.

Forgive me, but only ever bringing up Israeli aggression in response to Islamist terrorism in Bangladesh does not inspire me of “consistent standards”. Instead it speaks of simplistic Islamist and liberal whataboutery.

Will it help if I bring in the RSS, the Chinese govt, Janjaweed militants and Maoists as well next time? You may also want to point out where they are on CIF.

Why bring up any at all?

Are you seriously saying that Israeli aggression and Islamists funding terrorism in Bangladesh is a true and valid dichotomy?

Well, you bring in the 1971 war when discussing Pakistan’s human rights records. We all bring in tangential issues we think apply to the issue in question. I’ve explain my reasons above. If you’re uncomfortable with it, that’s your prerogative.

I’ll be sure to bring up the Chinese next time. On account of them being the only Chinese country in the world – they don’t get vilified enough.

Not that it is really relevant to anything: but I’d like to see a viable Palestinian state established next to Israel. I’d also like to see stronger regional co-operation between Middle Eastern countries, premised upon a common respect for universal human rights standards, equality between persons, and democracy: as well as free movement of goods and persons.

And I’m also sick of  “whattaboutery”.