As a partial antidote to Qaradawi’s poison (and the slightly less toxic views of his apologists), check out these clips from Al-Jazeera featuring the Iraqi MP Iyad Jamal Al-Din, who is both an Islamic cleric and an advocate of secular government. 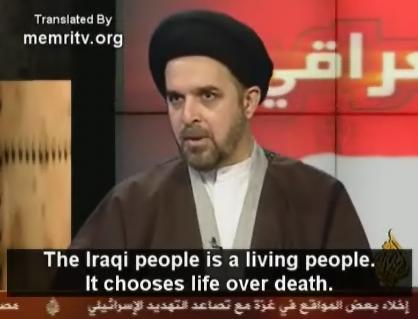 Free registration is required to watch, but here is the text:

Iyad Jamal Al-Din: The Islamic movement that rules in Iraq lives in the past – especially the political forces that raise the banner of the martyrs, and base themselves on a history of being oppressed, without taking into consideration the bright future. The Iraqi people is a living people. It chooses life over death. The religious discourse in Iraq sanctifies death, the dead, and the martyrs, who are viewed as a cultural asset. This discourse does not sanctify the living. If you want to be sanctified, to become immortal, you must first be killed. This runs counter to the will and aspirations of the Iraqi public. It is also noteworthy that the religious forces ruling Iraq formed a coalition out of fear, not love. They are afraid of the “other” – sometimes this “other” is secular, other times Sunni, and sometimes… the “other.”

Interviewer: Even though they are the rulers.

Iyad Jamal Al-Din: Yes. They did not become close out of love. They do not share any friendship and do not agree on joint political principles. The only thing they share is fear of the “other,” and if there is no such “other,” they create one in their imagination, in order to intimidate their followers and become close to one another.

Iyad Jamal Al-Din: The secular or liberal movement looks to the future, not to the past. They do not cry about the past. They don’t have a Wailing Wall. There are no dead people among the liberal or secular leaders. In the Islamic or religious parties – whatever you want to call them – you see the living hiding behind pictures of the dead, or martyrs. All their leaders are martyrs. There isn’t a single living leader in the Islamic movements who can say: I am your leader. He may be alive, but behind him there is a giant 5-meter-tall picture of a martyr.

Interviewer: They are trying to evoke…

Interviewer: This may be a good thing.

Iyad Jamal Al-Din: Some people may view this as a positive thing, but this people is a living people, which looks to the future, not to the past. If you want to rely on the past – okay, no problem. But if you are alive, and led by a dead person – this means you must die yourself in order to become a leader. Living nations produce living leaders, not martyrs. Only nations living in the past produce martyrs. They take pride in their past more than they look to the future.