“The piece on page nine of the print edition of today’s Observer, and online, reporting yesterday’s pro-Palestinian demonstration in London unfortunately includes a damaging misreport of comments made by George Galloway MP.

“The par reads: ‘In one of several speeches delivered in Kensington Gardens, George Galloway, leftwing MP for the Respect party, called on protesters to go to shopping centres and “shut down Israel’s shops” in what was believed to be a reference to retailers, including Marks & Spencer, which have come under fire for selling Israeli-sourced goods.’

“1) The quote attributed is wrong. Mr Galloway spoke of “Israel shops”. The language is precise. There are in the two shopping malls he mentioned mobile retailers called “Israel Shops”, which are staffed by Israelis and promote Israeli/West Bank goods – Dead Sea skin products etc. Mr Galloway was being extremely careful to focus his comments precisely.

“2) Not only did Mr Galloway not intend to refer generally to retailers, he is on film the night before speaking in the London Muslim Centre explicitly and categorically stating that Marks & Spencer should NOT be boycotted, explaining that it is a public company owned by shareholders like any other and has nothing to do with Israel.

“This is a very sensitive area, where innuendo and mishearing can have dangerous consequences. (It is highly regrettable that the reporters seek to explicate what they think Mr Galloway meant by passively referring to what unnamed people might believe, in fact groundlessly given the misquote.)

“We are insisting on an immediate online correction to the story and a suitably prominent correction in the next edition of the Observer. In our view, this piece can be easily read to impute motives and beliefs to Mr Galloway which, if they were true, would be considered reprehensible by the right thinking public. They are not true.”

You can hear Galloway’s exact words here at about 2:45:

So it appears that Galloway was urging his audience to shut down mobile “Israel Shops” selling Israeli products and located in certain shopping malls. Perhaps he should have been more precise. Why he is willing to let Marks & Spencer off the hook, given its “continuing links” with and “ongoing support” for Israel I have no idea.

But then a question arises: how to shut down these shops. Surely Galloway would not be advocating violence or destruction of property. So what other possibilities are there?

Perhaps a sign next to the shops warning the public to avoid buying products from Israelis. There should also be a widely recognized Israeli symbol like the Magen David to make sure potential customers understand just whom they should not be buying from. And of course there would need to be someone standing nearby to explain why the shop should be shut down. 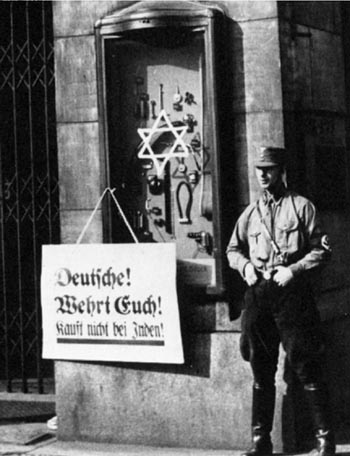 Update: While Galloway is always pleased to excoriate any action of the IDF, let’s remember how he celebrated Russia’s military operation against Georgia last summer:

Russia has shown the world the Yeltsin days when she could be held hostage, privatised and even dismembered are over for good.

The Russian army were an awesome sight on the march into the two breakaway Caucasus enclaves of South Ossetia and Abkhazia. All that military aid from the US and the Israelis to the Georgian army seems to have been wasted money.

The “awesome” Russian offensive cost the lives of more than 200 Georgian civilians, for whom Galloway’s heart distinctly did not bleed.