Here are some protesters at an anti-Israel rally in Eskişehir, Turkey. 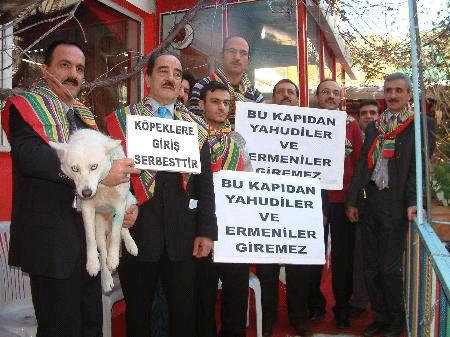 Makes a nice change from No Dogs, No Blacks, No Irish, doesn’t it?

The story is here and here, but unfortunately only in Turkish.

Here is a comment about it on an internet notice board.

I found this article in Turkish Radikal and as a Turk i felt awful about it.These filthy artards attitude against Armenians and Jews disgust even Patriotic Turks like me.

As for the article,it talks about an association in Turkish city of Eskisehir and it’s president saying Jews and Armenians cannot enter but dogs can,supposedly,he means to call them dogs.