Monday was observed as Memorial Day in the United States, so this week is probably as good a time as any to recall Ayman Taha, whose belief in Islam as he understood it did not prevent him from enlisting in the US Army special forces and going to Iraq, where he was killed in late 2005 while preparing a munitions cache for demolition.

A Google search on Staff Sergeant Taha turned up a blog in his honor, maintained by his family, with news about the opening of the Ayman Taha Community Center (including a mosque, a preschool and a clinic) in his native country of Sudan. With all the horrendous news from that country, it’s encouraging that good things sometimes happen there too.

I also found a page about Ayman Taha on an unofficial website devoted to the US military cemetery in Arlington, Virginia– including this photo of his final resting place. 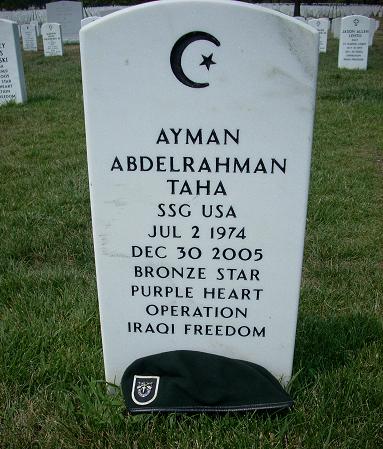 There he lies in the same ground as Christians, Jews, Buddhists, Hindus, atheists and who knows what other kinds of believers and non-believers. May they all rest in peace.