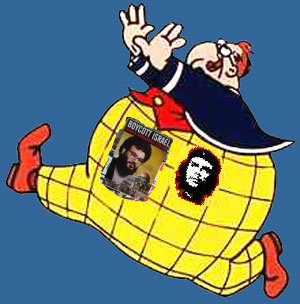 Richard Seymour of Lenin’s Tomb (see artist’s conception above) has taken upon himself the grim but necessary task of trashing the late Congressman Tom Lantos, a Holocaust survivor who was one of Congress’s leading advocates of worldwide human rights.

Seymour claims that because both this blog and the Frontpage magazine website had appreciative things to say about Lantos, he was therefore a “warmonger.” He then provides a link-free enumeration of Lantos’s alleged sins of omission and commission (among them, of course, support for Israel). Now some of what Seymour writes here may be accurate (I never nominated Lantos for sainthood), some may be distorted or half-true and some may be flat-out false– the absence of sources makes it impossible to check. Among other things, Seymour writes, Lantos “supported military appropriations for El Salvador’s death squads.” I can find no record of Lantos’s votes in Congress on aid to El Salvador’s regime during the shameful “dirty war” of the 1980s. If he did support the military aid, he was wrong to do so. But it’s also worth noting this tribute to Lantos from the Washington Office on Latin America, a strong critic of US policy toward that part of the world:

“From its earliest years, the [human rights] caucus [chaired by Lantos] was always open to the concerns we raised about human rights and U.S. policy. Tom Lantos, his wife Annette, who served as director of the caucus, and their staff met with Salvadoran trade unionists, Nicaraguan farmworkers, Chilean church workers, with the range of activists in Latin America,” said WOLA Executive Director Joy Olson.

“Because of Tom Lantos’ personal commitment, the caucus held hearings to educate members of Congress about issues ranging from the Contra war in the 1980s to the unsolved murders of women in Guatemala. He and his staff helped make Congress, the administration, and the media take human rights in Latin America seriously,” she added.

Then we come to my favorite part of the post: Seymour’s stunningly accurate evocation of a dinner party of neoconservatives and members of the “pro-war Left” like Lantos and, I suppose, me:

They are so close, yet not close enough. They network together, dine together, appreciate one another’s jokes, sign one another’s petitions. Oh, but then some silly issue comes up at the dinner table. A neocon will say that the liberal support for egalitarian permissiveness dilutes the martial values and strong work ethic that America needs to defend itself. A liberal warmonger will reply that the neoconservative hostility to gender equality, gay rights, and social welfare makes a mockery of their support for the humanitarian agenda internationally. Yes, one neocon will reply, but not all neoconservatives oppose gay rights and it isn’t as important as ensuring the conditions for freedom in which civil society can fight for such rights. But, the liberal hawk avers, not all neoconservatives supported democracy in Haiti and your record has been spotty to say the least, what with the mass terror in Central America – we have the advantage of consistency, or at least some of us do. Yes, the neocon godfather interrupts from the top of the table, but your ‘consistency’ is purchased at the price of impotence. If you don’t play the game of real politics and aren’t prepared to support America’s real interests even if it means getting your hands bloody in the short-term, even if it means torture chambers and death squads and a bit of rape, then no one will listen to you and your words amount to nothing. The world isn’t a nice place, much as we would like it to be, and we must do what is in America’s interests, because those are the interests of democracy. So, one timorous liberal who isn’t sure he should be there chips in, are you saying that support for human rights is a rhetorical component of the struggle for American supremacy which will eventually deliver strong liberal capitalist societies for most of the world? Doesn’t that actually suck? At which point the rest of the table in one voice tell him to shut up.

I myself attend at least one such dinner party a week, often at Paulie Wolfowitz’s or Willie Kristol’s house, and all I can say is: it’s like Seymour was a fly on the wall.

Seriously, I’m dying to get invited to one of those dinner parties just so I can hear the alleged jokes.

Perhaps when I have a chance, I’ll evoke a dinner party of “anti-imperialist” leftists and Buchananite paleocons like Justin Raimondo (one of Seymour’s regular sources).