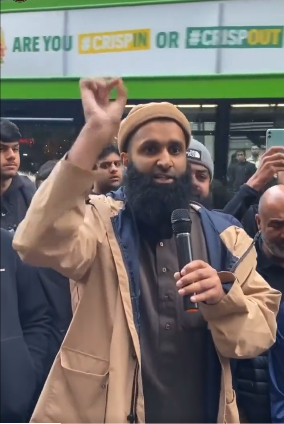 Mobs, predominantly of Islamist Sunni Muslims, are protesting in the north west of England against the independent film: The Lady of Heaven. Chants of “Kafir Kafir Shia Kafir” are being heard outside cinemas that have now been forced to cancel the screening of the film due to safety concerns for their staff and customers. If takfiring Shia Muslims isn’t a form of anti-Muslim hatred, then the APPG working definition of ‘Islamophobia’ is not fit for purpose. It is letting Muslims from minority sects down.

The Arabic term ‘Kafir’ means non-believer or disbeliever. It is a descriptive term to distinguish those that are Muslims and those that are not. For a Muslim to call a fellow Muslim a ‘kafir’ is to takfir (ex-communicate) them from the religion of Islam. Therefore, takfiring is the process of one determining who is or who is not a Muslim.

The use of takfir is not an academic exercise, it is a practical one that has real life implications. In the most extreme of cases, it is used by Salafi Jihadis – a narrow strand of extreme Sunni Muslims such as the Islamic State­ – to target and kill minority Muslim sects within Islam. The Islamic State used takfir liberally, targeting not only minority sects of Muslims in Iraq and Syria, but also their fellow Muslims in the Sunni strand of Islam. This move was particularly controversial within the global Jihadist scene. Groups such as al-Qaeda, responsible for the 9/11 attacks in 2001, were forced to issue a statement condemning the use of takfir to kill Shia Muslims and claiming ISIS were even more extreme than they were.

So, whilst rival jihadist organisations condemned the use of takfir by the Islamic state, it seems that here in the U.K. it can be applied with ease. This is particularly problematic when it comes to tackling hate towards Muslims.

The All Party Parliamentary Group of British Muslims (APPG) proposed a working definition of ‘Islamophobia’ in their report Islamophobia Defined. Their proposed definition for the term is: “Islamophobia is rooted in racism and is a type of racism that targets expressions of Muslimness or perceived Muslimness.” It is the hope that this definition would be able to capture forms of anti-Muslim hatred into a term that could be used in law, institutions and society in general. But the flaw in the definition is the exclusion of sectarianism.

Professor of Sociology at Bristol University, Tariq Modood, spoke about the misclassification of Islamophobia in cases of sectarian disputes. He states in oral evidence:

“So I think racialising is something that is done from the outside and sometimes there are aspects of self-racialising, but dividing a group and saying you are not the real thing… I think we have to find some other category for that, it is a fault and it would fail some of my tests, but not specifically in relation to Islamophobia which would fail my tests in terms of equality and intolerance.”

The report agreed with Modood, stating that: “it would be misleading to interpret Islamophobia as a tool that can capture, together with the issues of racialisation, issues of sectarianism.” This is bizarre logic. The fact that the proposed definition is based around racialisation, and therefore cannot accommodate sectarianism, is demonstrative of a flaw in the definition.

There are two statements of fact that can be proposed which highlight how this definition is letting minority Muslim sects down. The first is that Muslims are not a race. They can come from any religious, cultural or geographical background and they are free to enter and leave Islam as they please. Therefore, to racialize Muslims is a demonstrable lie because whilst you can change your religion, you cannot change your race.

When Islamist Sunni Muslims declare Shia Muslims kafir, this is more than just sectarianism, it is anti-Muslim sectarianism and therefore anti-Muslim hatred. The APPG definition of Islamophobia lets down minority Muslim sects if it doesn’t appreciate this distinction.