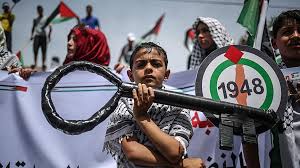 Nakba, Arabic for catastrophe, is a day of commemoration for the Arab defeat in the 1948-1949 war around the creation of Israel. A recent Nakba Day demonstration by Arab students at Ben Gurion University in Be’er Sheva drew condemnation across Israel, especially the Palestinian flags being flown. Because of the Oslo Accords and Israeli recognition of the Palestinian Authority, legal advisors to the University authorities recommended to allow them to be flown.

The Israeli-Arab population is exhibiting signs of restiveness and adoption of more combative attitudes, and also signs of integration into the economy, society and security forces in the country. It is hard to discern what the predominant trend is, since the nationalists and militants intimidate those who are moderate and seek peaceful coexistence between Arabs and Jews. But most of the elected political leadership is aligning more and more openly with the PLO and even Hamas, and they all espouse the “right of return” for the descendants of the Arab refugees which would turn Israel into an Arab-majority state.

The Nakba occurred because the Palestine Arabs and the Arab states tried to wipe out the Jews of the Land of Israel, starting with the collaboration of Palestine Arab leader Amin al Husseini with Hitler and their joint plans to bring the Holocaust to Palestine during WW2, which failed. Considering the extreme murderousness of Arab aims, Israel has treated her foes with restraint and generosity. Yet many in the West and among the Arabs misrepresent the history of the 1948 war and the events leading up to it, blaming the Jews for the war, just as they earlier blamed the Jews for bringing upon themselves the enmity and hatred of the Germans.

Large-scale violence was initiated by Arab gunmen on November 30th 1947, a day after the UN resolution in favour of partition. In the following months 2000 Jews were killed, by fire which was launched against every Jewish kibbutz, moshav, town and city by militias that were ensconced in most neighbouring Arab villages and towns. Many thousands of Jews were displaced, and even more Arabs.

The invasion by the armies of the Arab League states occurred on the 15th May, the day Israel declared independence. The Arab leaders called for the Arab population to temporarily leave their homes and clear the way for the Arab armies. The Secretary General of the Arab League Azzam Pasha declared that “there will be a massacre [of Jews in Palestine] such as the world has not seen since the time of the Mongols”. The Chief of the Imperial General Staff and Middle East expert Field Marshal Bernard Montgomery declared “the Arabs will knock the Jews for six”. Great Britain and the US imposed an arms embargo on Israel, after having armed the Arabs. Everyone expected the 600 000 Palestine Jews to be exterminated. Even the leaders of the Yishuv estimated their chance of victory to be no better than 50%. Finally Israel won against all odds but at the war’s end Jewish casualties numbered over 6000, more than 1% of the population.

Today Israel again faces the threat of annihilation, this time from the fanatical criminals who have seized control of Iran and seek to wipe the country out with nuclear weapons.

It is worth adding that there have always been advocates of moderation and peace among the Palestine Arabs, including within all the leading families such as the Husseinis, Nashashibis, Dajanis, Nusseibehs and others, some of whom were killed by their fellow Arabs for it. And today eloquent Palestinian voices continue to call for their leaders to discard the destructive cult of the Nakba and to work towards a future of reconciliation with the Jews.