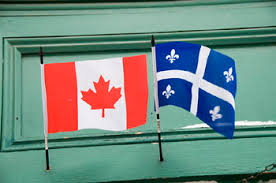 Quebec has long considered itself to be a “distinct society” within Canada. Although there are French-speaking (francophone) Canadians in every Canadian province, Quebec is the only province in Canada with a large francophone majority (though New Brunswick is 30% francophone and there are more than 1 million franco-Ontarians). Quebec also has a substantial and influential Anglophone minority, most of whom live in Montreal though there are also substantial communities in the “Eastern Townships” east of Montreal and in the Outaouais, north of Ottawa.

Quebec is not only different linguistically. Unlike the other provinces, which settle civil disputes using Common Law (much like the U.S. and U.K.), Quebec has a civil code based on the Napoleonic Code. (Criminal matters are determined by the Canadian Criminal Code, which applies in all 10 provinces and 3 territories.)

Quebec has long sought to have its “distinctiveness” enshrined in the Canadian Constitution, without success, something that rankles Quebec politicians and many francophone Quebecers.

When then Prime Minister Pierre Trudeau patriated the Canadian constitution from Britain in 1982, he wanted all the provinces to sign on to it. In late night meetings later referred to in Quebec as “the night of the long knives,” Trudeau secretly met with the premiers of the other 9 provinces to obtain their consent, leaving Quebec’s premier – who had made “distinct society” a condition of signing on — out in the cold. As a result, the government of Quebec has never signed onto the Canadian constitution (though it still applies in Quebec).

Given this history, it shouldn’t surprise anyone to learn that neither the Quebec government nor the francophone population takes kindly to interference in its affairs by English Canada or the Federal Government, even when, as now, it is headed by a Quebecer (Justin Trudeau).

As a result, The federal government and English Canada generally stay out of Quebec’s affairs. Although support for Quebec independence has waned considerably since the last referendum on independence in 1995, which the Independantistes lost by a very small margin (50.4% to 49.6%), separatist sentiment always rekindles when Quebec’s policies are challenged by English Canada and/or the federal government. (After the referendum, Parizeau blamed “money and the ethnic vote” for the loss, and resigned the premiership.)

The history of the laicite law may be said to have started in 2007, when the small village of Herouxville, population 1,300, issued a “code of conduct for immigrants”, despite having zero immigrants living in the village. The code, which made the village an international laughing-stock, stated that weapons, including symbolic weapons, were not allowed in schools, forbade face covering, and would not allow prayer in schools. It also forbade stoning and said physicians didn’t require permission to perform blood transfusions. Personally I had no problems with any of that, but the fact that the town had no immigrants did make the statement seem rather superfluous, and showed the deep division between rural, francophone Quebec, and cosmopolitan Montreal.

A commission on “reasonable accommodation” of immigrants headed by historian/sociologist Gerard Boucher and philosopher Charles Taylor was then established to hear the opinions of all Quebecers. In 2017, the previous Liberal government passed Bill 62, which forbade face coverings when providing or receiving services from the provincial government. (This provision was maintained in the Laicite law.) This law was criticized by human rights groups, etc., but was strongly supported in Quebec. In the rest of Canada, 68% said they agreed with the law.

In 2019, a new Quebec government headed by Francois Legault of the Coalition Avenir Quebec passed An Act respecting the laicity of the State, (commonly referred to as Bill 21), which prohibits provincial public servants in Quebec in positions of coercive authority (i.e. judges, police, prosecutors, and, most notably, teachers) from wearing any religious symbols (e.g., crosses, kippas, turbans, and hijabs), though there is a grandfather clause for employees remaining in the same position. The law also requires individuals to have uncovered faces when providing or receiving some Quebec government services.

The law affirms the equality of all citizens, the separation of State and religion, the religious neutrality of the state, and freedom of conscience and freedom of religion.

The laicite law has massive support from the population of Quebec, but has been challenged by the opposition Liberal party of Quebec, for going too far and by the independence-minded Parti Quebecois, for not going far enough. More significantly, Canadian Prime Minister Justin Trudeau; Canadian New Democratic Party leader Jagmeet Singh; and many other public figures in English Canada also oppose the law. A lawyer for Amnesty International maintains that the law will most strongly affect Muslim women, and calls the stated goal of the law a “pretext” for a law that primarily targets Muslim women. FWIW, I believe that assessment is correct.

To insulate the law from court challenges, the Quebec government of Francois Legault invoked section 33 of the Charter of Rights and Freedoms, commonly known in Canada as the “notwithstanding clause,” which allows the federal and provincial governments to override Charter protections. The notwithstanding clause had only been invoked once before, also by Quebec, to protect its [ridiculous] sign-language laws from court challenges.

Still, in April 2021, a Quebec court upheld most of the provisions of the law, but struck down the requirement for teachers and politicians, a decision hailed by the English Montreal School Board, which had strongly opposed the ban on religious symbols for teachers.

More recently, city councils in two cities in Ontario, Toronto and Brampton, have announced they will each contribute $100,000 to a court challenge of Bill 21. In Calgary, Alberta, Mayor Jyoti Gondek has publicly mused about challenging Quebec’s law and the city’s previous mayor, Naheed Nenshi, has also supported a court challenge to the law. In response, Quebec columnists have condemned these efforts and suggested that the city councils use the money to look after their own affairs. As for Justin Trudeau, he has expressed support for the court challenges but has yet to say whether the federal government will join the challenge to the law.

And therein lies the trap. The current premier of Quebec Francois Legault, was a cabinet minister in the separatist Parti Quebecois government from 1998 to 2003. Although he quit the party in 2009 and vowed not to hold another referendum, he is considered by some to be a “closeted separatist” and should Quebec be thwarted with regard to the Laitice law, some worry he could return to his separatist roots.

If the Canadian Supreme Court were to decide against the law, the frustration among francophone Quebecers could re-ignite the forces that want Quebec to separate from the rest of Canada. Some predict that if the high court rules against the law, pro-independence opinion could reach the level last seen when the Meech Lake Accords, which aimed to bring Quebec’s government into the Canadian constitution, failed in 1990.

I grew up in English Montreal, and came to know many Quebecois in my neighbourhood, my dad’s store and later in various work and social environments. They are lovely, happy-go-lucky people, with more joie de vivre than any other nationality I’ve met in my travels. But many of them have a chip on their shoulder about being having been conquered by the English in 1763 (the Quebec license plate says “Je me souviens,” [I remember]) and being a minority in an otherwise English-speaking country. If English Canada presses too hard with challenges to the laicite law, they could rekindle a nationalistic flame that may be hard to extinguish.