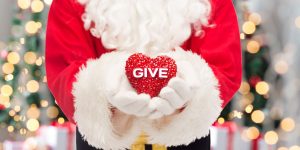 In my childhood the first week of December still felt a long way from Christmas. But at least there was the opening of the first windows of the Advent Calendar, and the first Christmas cards landing on the mat. We got a great many cards, mostly because Dad was head of Beeb East Anglia and a bit of a local public figure. It was my job to open the letters, hoard them in an ever growing pile and on Christmas Eve to string them on ribbons as part of the decorations.

With a child’s snobbery I liked the big glossy cards best. But one thing the cards taught me about was charity. Many were charity cards, as plenty of people would buy no other kind. So from Christmas cards that I learned about the amazing range of British and international organisations seeking to save the children, the animals, the homeless, the aged, the sick, the poor of the Third World, the persecuted, the earth…all vying for patronage on festive bits of cardboard. It gave me the impression, not unreasonable for a middle-class English child in the later Sixties, that if the world outside my window had its problems, it was still a pretty benevolent place.

You can still buy charity Christmas cards but the age of Christmas cards is gone. You can send seasons greetings with a single post on social media, and a click on your ‘favourite charity’ will instruct Amazon to send it at some fractional sum as we do our Christmas shopping. We can publicise the charities we give to without bothering to use the post. It’s never been so easy.

But it’s clear that since my childhood much of the mainstream charity sector (I don’t mean the entire vast non-profit sector but large famous organisations devoted directly to humanitarian causes) has become – that horrible word, ‘problematic’. Part of the problem is bloat. The big charities are now so bureaucratised, absorbing so much money in salaries, that some of my most generous British friends will only donate to small charities like the local hospice.

Charities have become more politicised. The outgoing chair of the Charity Commission, Lady Bowker, warned in February that “If charity is to remain at the forefront of our national life, it cannot afford to be captured by those who want to advance or defend their own view of the world to the exclusion of all others,” she said. “Charities can adapt to the latest social and cultural trends but there is a real risk of generating unnecessary controversy and division by picking sides in a battle some have no wish to fight.”

It is not just a matter of ‘culture war’ spats in the National Trust. One aspect is the semi-integration of charities into government via contracts, with the whole sector being more flush with public money than private donations. Another, especially where the foreign aid and the human rights organisations are concerned, has been charity mission creep. HP regulars need no reminder of how aid charities like Oxfam and War on Want, as well as human rights organisations like Amnesty have shown egregious bias against Israel. But the issue is wider, to do with the desire of ambitious graduates climbing up the hierarchy in these organisations to turn them into political players on the basis of progressive dogmas. George Soros cheerfully calls his massive funding of ‘open society’ initiatives in Europe and elsewhere ‘political philanthropy’, while corporate philanthropy is often as contentious as their corporate political donations.

Despite the complicated legal definitions, there have never been clear lines between philanthropy, campaigns on social issues, and political activities. Yet they are not quite the same, as is obvious from the perennial left-wing critiques of ‘mere’ philanthropy as reactionary because traditionally linked to religion and no substitute for the solution of social problems by the state. Now there are objections to the very concept of ‘charity’ as patronising, and the rhetorical emphasis of charities themselves is on ‘empowerment’ of the recipients of funds and services. But paradoxically, never have the left-leaning cultural elites of the charity sector as well as academe and the media been so invested in the idea of their own benevolence. For all the orthodoxies of ‘empowerment’, fashionable ‘woke’ ideology essentially makes ‘victim’ groups dependent on the grace and favour of those members of the allegedly all-powerful oppressor group who, as a form of repentance, fund and organise for the ‘vulnerable’ an advancement they could never have managed for themselves. This isn’t so much the politicisation of charity as the philanthropisation of politics…

But hey, I loved the Christmas cards, and I’m no Scrooge to discourage people from generosity. Which charities do HPers think should be supported?