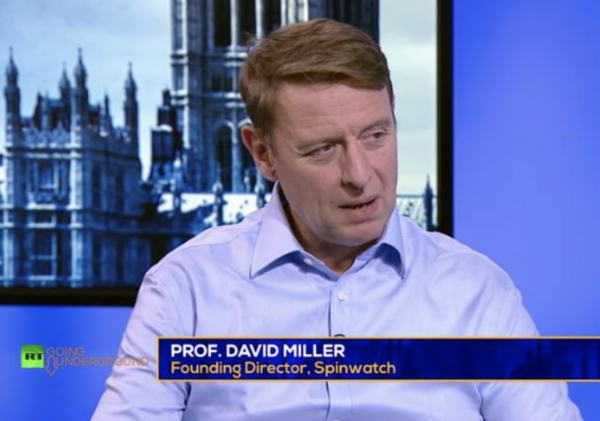 Professor David Miller has made several statements claiming Jews are working in the service of Israel. But in whose service does Miller act?

After all it wasn’t a member of the Board of Deputies of British Jews who appeared on a Russian propaganda station in January 2019 claiming “there are questions which arise about the extent to which the British government has been engaged in managing and manipulating media coverage of the Skripal affair.” It was him.

Nor was it a Jewish charity worker with an OBE appearing on Russian propaganda channel Sputnik News in September 2018 claiming “the intelligence services are attempting to undermine Jeremy Corbyn – they attempt to undermine any progressive movement in this country and always have done.” it was him.

At a meeting of Labour Against the Witch Hunt in July last year Miller said “we must of course engage the enemy in this, which is not just of course the British government and US imperialism but the Zionist regime.”

If David Miller thinks of the British government as “the enemy” which country does he consider a friend?

Professor Miller complains that at an academic from the University of Bath went on a secondment to MI5 for six months. he says; “quite right to complain about academics especially the orientation of academics towards the state…”.

Presumably Miller would be more comfortable if British academics had an orientation towards a different state.

Earlier in the above clip he says “Tim over there made a point in the last session that one needs to be very careful that one doesn’t talk about secret Zionist conspiracies and that is very true but…” at which point his argument disappears in conspiratorial nonsense.

In the name of Palestinians Professor Miller attacks Jews at Bristol University, yet has no qualms about appearing on Russian propaganda outlets to rubbish the British government. No BDS against Russia of course. And when it comes to atrocities perpetrated by the Russians and their allies he just lies:

The mass murder of which you speak – in alleged CW attacks like Douma – is organised by the U.K. and NATO, with the connivance of the opposition. The propagandist in this discussion is the one paid to retail falsehoods, as you do above.

The man who sees Israeli operatives everywhere, even in his own lectures can’t see Russians anywhere, even when they’re nearby murdering British citizens.

If we’re going to talk about foreign agents on British soil it is he who has serious questions to answer, the first one might be asking how much the Russians are paying him for his appearances on their propaganda outlets.