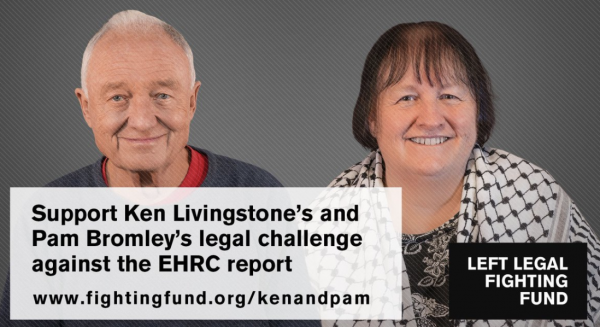 Former Mayor of London Ken Livingstone’s attempt to obtain a judicial review of the Equalities and Human Rights Commission report that blamed him and others for Labour antisemitism has gotten off to a poor start.

He launched a fundraiser together with Pam Bromley, also named by the EHRC, using Bristol University Professor David Miller’s Left Legal Fighting Fund. The campaign launched six days ago and has raised a mere £15,747 out of their target of £40,000. Over the last 5 days it has raised around £1,500.

Those familiar with the group won’t be surprised. A similar crowd funding campaign for “Esther” an anonymous Jewish activist (who we speculate is Naomi Wimborne Idrissi) has only succeeded in raising £6,000 out of its target of £30,000. Her appeal has been going for three months.

Perhaps even the most ardent of Corbynistas are tired of laying out for wealthy antisemites who don’t think their cases are worth spending their own money on?