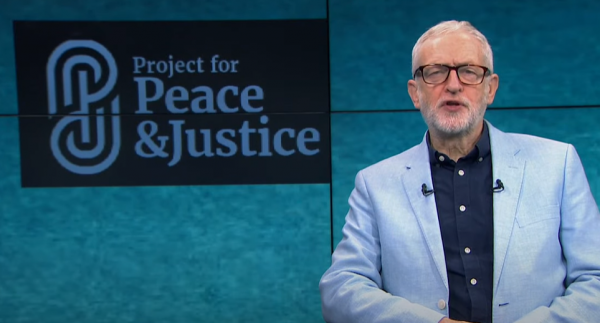 Jeremy Corbyn is no longer a sitting Labour MP. Perhaps that’s why he appears to feel free enough to return to type. According to Corbyn his new Peace and Justice project will “promote peace, global co-operation, climate justice, self-determination, democracy and human rights by working with social movements and trade unions and building networks for progressive change.” I’ve taken a good look at a video tweeted by the official account for the group and seen a few familiar faces in it…

We’ve only just gone live and we’ve already had thousands of messages of support. Watch some inspiring campaigners say why they’re supporting the Peace and Justice Project here – then join us. https://t.co/8zngF9Q4Yi pic.twitter.com/uBWFR2V8xw

It kicks off with comedian Alexei Sayle, a fan of Corbyn’s who has been outspoken about antisemitism in the Labour party, for example in 2018 he said:

The eagle eyed will spot that another of the 15 contributors to appear in the video was the head of the Islamic Human Rights Commission Massoud Shadjareh. At a late night vigil on the death of Iranian General Qassem Soleimani he said:

“You are very fortunate to live at a time that to see and touch and feel a man like Soleimani and we hope and we pray and we work hard to make sure that there will be many, many more Qassem Soleimani’s. We inspired to become like him, we are inspired and we are jealous of his shahadah [martyrdom] and want the same thing for ourselves and our loved ones because that’s the best thing that could happen to us.”

He’s also dead set against what his organisation the Islamic Human Rights Commission refers to as interfaith dialogue with “Zionists”:

“Zionists have started to implement an insidious strategy to build ties with the Muslim community in Britain in order to normalise Zionism and the brutal illegal occupation of Palestine. This cosying up to mosques and Muslim groups is nothing more than a deceitful attempt to normalise the continuing murder, maiming and dispossession of the Palestinian people by using vehicles like inter-faith work

The rapper Lowkey is also one of the 15 on the video. Lowkey’s lyrics include

“Every coin is a bullet, if you’re Marks and Spencer And when you’re sipping Coca-Cola That’s another pistol in the holster of the soulless soldiers You say you know about the Zionist lobby But you put money in their pocket when you’re buying their coffee”

“It was the planes. Not controlled demolition, The BBC didn’t report the explosion of Building 7, 20 minutes before hand, on my television, They found passport’s and plane flying manuals belonging to terrorists in the rubble. That all makes perfect sense, But why did I lose my voice when my thirst was quenched, So dissolve my tongue with Coca Cola, Seduce my brain with celebrity, Burn my eyes with The Sun, Muffle my mouth with McDonalds, Tie my feet with Nike’s, Tell me lies about the 11th of September,”

The former President of Ecuador, Rafael Correa, appears in the video to express his support. Correa is a wanted man in Ecuador having been found guilty in absentia of charges relating to corruption while President and sentenced to eight years. Correa is Corbyn’s type of socialist, his redistribution of national resources involved handing them over to the Chinese. The indigenous people of Ecuador for whom Carrea is considered a tyrant were forced to live under martial law to allow a Chinese copper mining company to take over their ancestral lands.