Whereas Keir Starmer has been forthright in his condemnation of China’s actions against the Uighur minority, the responses of some on the left have been equivocal at best.

My first thought when I read Zoe Williams’ article about China in yesterday’s Guardian was – is it really necessary to wheedle and cajole her readers to condemn the treatment of the Uighurs?

It may be uncomfortable to side with rightwing sabre-rattlers, but the treatment of the Uighurs demands all our attention

She goes on to draw a parallel with the Cold War in order to warn leftists not to ignore human rights abuses in China:

Naturally unwilling to buy into an assumption of capitalist supremacy, many found it hard to condemn elements of communism that were plainly abhorrent.

Although there were many sensible comments under this piece, there were also a fair few which pointed to the skewed moral compass of some on the left. ‘They are a regional bully , the US is a global one’ was one response. Another comment – since deleted – offered a variation on the same theme, asserting equivalence between pledges to the flag in US schools and China’s enforced loyalty.

Others on the (further) left had equally perverse responses. Aaron Bastani, still sulking over Corbyn’s replacement by Starmer, came out with this particularly bizarre take. 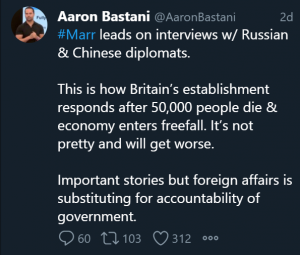 Roshan Salih, editor of 5Pillars, seemed more exercised by the fact that ‘Zionists’ were unhappy with China’s actions than by the plight of the Uighurs. Here are some typical recent comments from him on Twitter:

Very concerning that Uyghur cause is being hijacked by Western states & pro Israel/Islamophobic civil society orgs. The same happenned in Iraq, Afghanistan, Libya & Syria and look what happened there. These ppl don’t care about Uyghurs, they’re just on an anti China crusade

I assure you if the Uyghurs lived in Sweden no western state or right wing civil society organisation would say a damn thing about them.

Muslim nations which have close ties with China need to lobby them publicly, or at least privately, to change policy towards Uyghurs. China needs to realise its actions will backfire and will breed radicalisation, as well as be exploited by West to perhaps provoke armed uprising

It’s revealing to compare the tone of that last tweet with Salih’s outrage and vehemence when reacting to the excesses of – the UK’s Prevent programme. 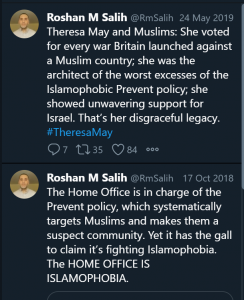 His rhetoric when raising concerns about the Uighurs seems far more tepid – and he appears to see China rather as the potential victim of a malign Western plot than a regime accused of attempted genocide against its Muslim minorities.