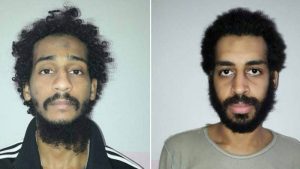 The Supreme Court has ruled that the UK Government has acted unlawfully by handing over personal information of the colloquially dubbed “ISIS Beatles” to the US. The personal information shared, as well as other evidence, could lead to the execution of two of the members – Shafee Elsheikh and Alexanda Kotey. The seven judges, which includes Lord Kerr, concluded that the decision made by the then Home Secretary Sajid Javid breached strict data protection laws.

The Home Office is reported to have said they are “disappointed with today’s judgment and are carefully considering the next steps.” Furthermore, their commitment remains as strong as ever to prioritize “national security and to deliver justice for the victims and their families.”

With the potential of the evidence being requested back by the UK Government, and for Shafee Elsheikh to now seek a trial in the UK – we could be facing a serious national security threat because of a legal technicality.

The threat posed by ISIS returnees is not a topic that suffers from parsimonious research, in fact, it is one that is at the forefront of counter-terrorism scholars, policymakers and governments worldwide. With over 5000 Europeans having traveled to Syria to join ISIS and many of them now wanting to come back, it must come as no surprise that some, if not all – having socialized themselves in the enemy stronghold, pose a domestic threat should they return.

In the report Wester Foreign Fighters by The Institute of Strategic Dialogue, Thomas Hegghammer’s research is cited in relation to what the immediate risks are by returning Jihadis. Hegghammer concludes that although many jihadis wish to fight abroad, a minority may attack at home after being radicalized. Furthermore, in Hegghammer’s dataset – he finds that although one in nine returnees goes on to carry out attacks at home, combined with other potential indicators, a foreign fighter is at high risk of becoming a violent extremist.

The ISD report also suggests that there are three types of terror threats posed by foreign fighters. The first is someone sent back to carry out attacks, the second is someone carrying out an attack on their own direction and the third is providing operational expertise for other terrorist plots. It would be reasonable to suggest that Shafee Elsheikh could be part of one of these three threats.

Many will be angered by the UK Government losing in the Supreme Court on a data protection technicality, but the anger mustn’t be directed at the Government, the courts or even ElSheikh’s mother, for bringing this issue to the courts – but rather at Shafee Elsheikh himself.

Elsheikh along with Kotey, Jihadi John and one other, possibly Aine Davies were known as the Beatles. Alleged to have killed 27 people, the ISIS Beatles are believed to have caused havoc and mayhem in Syria. But Elsheikh, as with many others that traveled to the so-called Islamic State seemingly did so through no compulsion, other than the lure of violent jihad that ISIS offered them. It was, as it seems, a decision of his own making.

Marwa ElSheikh, the mother of Shafee, brought the data protection challenge to the courts. Her intention was that, whilst she recognized the severity of the alleged crimes, Shafee must answer for them in a UK court. It is likely there is less of a chance of a successful prosecution here than in the US. But her legal argument, as well as the data protection one, is that Sajid Javid did not get assurances that Shafee would not receive the death penalty. It is Marwa Elsheikh’s right to bring this up and challenge it.

But, as I am in no doubt that Marwa Elsheikh believes in the rule of law, I would invite her to consider that if assurances were sought and confirmed that the death penalty was off the table, then why shouldn’t Shafee be tried in the US where a successful prosecution is more likely? It is perhaps because, as a mother, despite all the horrors Shafee is alleged to have committed, she wishes to ease the punishment he could receive.

Whilst the outcome of what now happens with Shafee Elsheikh is not clear, what is, is the unintended consequence of the law being used to potentially weaken national security. This is not the time and place for the blame game, but rather the time to be more intelligent when dealing with matters of law. Whilst morally, many will be angered by this, the law is the law and it must be respected. This is a learning point for the Home Office and one which I am sure they will consider should they find themselves with a similar case in the future.