Many have expressed concern over the fact Alastair Stewart was forced to step down from his ITV job after a heated exchange with Martin Shapland on Twitter. Here is the offending tweet, quoted by Shapland. 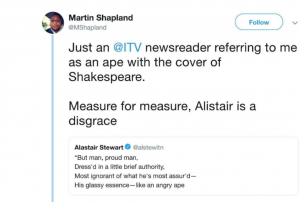 It’s quite understandable that many people have expressed sympathy for Stewart.  (However, when reflecting on whether his employer’s response was reasonable, it might be noted that Stewart has apparently been guilty of several errors of judgement on social media.)

There is of course no explicit racist jibe here.  But it’s also easy to see why Martin Shapland was offended – the phrase ‘angry ape’ has nothing to do with race in Isabella’s original speech from Measure for Measure – but does in its new context, however innocently and unintentionally.  It’s relevant to point out that Stewart has apparently quoted this speech before on Twitter – that reinforces the opinion, shared by most people, that there was no malice involved.  However it was still, I think, ill-judged.

Racism doesn’t have to be intentional to make an impact.  There are different shades of ‘unintentional’. People can propagate unambiguously racist tropes – about the Rothschilds for example – without understanding their provenance and significance.  The Stewart tweet is far removed from a case like this, in which the organisers of a grotesque float seem to have been given too much benefit of the doubt over their innocent intentions.

It seems to me rather closer to this example, discussed in a post I wrote back in 2011. A cartoon of bankers with very prominent noses offended many readers of the Times – but as the cartoonist in question always draws people with similarly exaggerated features it seemed reasonable to absolve him of any racist intent. The problem was caused by a coincidental juxtaposition of elements, innocuous individually, but suddenly taking on an appearance of racism when combined.

Shapland himself has said an apology would have sufficed in the case of Stewart. However, even if one thinks the response to the tweet was disproportionate, it seems inadequate and disingenuous to claim, as many have done, that he was sacked ‘for quoting Shakespeare’.