Fifty years, half a century, as long ago as that, since the first moon landing. The BBC has done a couple of excellent programmes, one, Moon, on Radio 4, a low-key dramatisation of the Apollo 11 journey, the dialogue being the transcript of the astronauts and the Control Centre at Houston. How gripping is the laconic technical speech in flat military American with occasional banter and then the sudden burst of poetry of the Eagle has wings, the Eagle has landed. You of course know how it turns out but are thrilled. It is the thrill of ritual, like the Nativity story or the Christian burial service, earth to earth, ashes to ashes, dust to dust. You can see that the kind of suspense a thriller tries to build with the unknown and shocking here is done with the known, the expected, the ever repeated.  You echo the breath of relief the control centre gives when the ship comes back into signal again.

Channel 4 did a good 2 parter, Moon Landing Live, following the media coverage at the time. There’s an interview with Armstrong’s parents where the interviewer asks what Armstrong had to say about it, and his dad says it’s hard to get anything out of him at any time. A quiet boy. And his mother couldn’t remember his stilted One Small Step line.  It was a little like Monty Python’s Life of Brian when the spectators garble the Sermon on the Mount.

BBC4’s Chasing the Moon is beyond praise, quite brilliant, the footage beautifully put together and with some great voices including Sergei Kruschev, Nikolita Kruschev’s son. Von Braun, the handsome, charismatic ex-Nazi as project manager who wowed the politicians. The competition between the two super-powers, the ambition and vision of Kennedy.  A lot of the workings were fairly inglorious. The astronauts had to be turned into superstars and do a lot of publicity, which they all hated. Congressmen had to like shaking their hands.  There were pork-barrel politics. Not a pretty sight a lot of it, but what great enterprise has never had this? The medieval cathedrals which were built for the glory of God and now overwhelm us had the same driving motives of showing-off by kings, bishops and lords, and their craftsmen after years of training and learning, died in the working out of their schemes, as the astronauts died in Apollo 1.

I’ve only got to the end of Episode 4, to Apollo 8, and we have finally left Earth’s gravitational field and are now orbiting the moon. I say “we” as when it was declared this was for all mankind, enough 100s of millions shared that sense, as a grand city is for all who see it and visit it. Earthrise has now been broadcast to give us a wondrous view of our little planet.

I wasn’t so full of wonder at the time. I do remember the moon landing and I think my parents were awestruck. My mother said how brave the astronauts were. I said I thought Captain Cook was braver, as the Endeavour sailed out for years into totally unknown territory and was out of contact, whereas these astronauts were in constant communication and looked after.  My mother got annoyed, as she always did at any intellectual opposition and us throwing cold water over her enthusiasms, poor woman. About 30 years later my sister reported she had had exactly the same conversation.  I have a sense that the young were more cynical than the old, and muttered about wasting money.

How, when the aged are reverently, passionately waiting
For the miraculous birth, there always must be
Children who did not specially want it to happen, skating
On a pond at the edge of the wood:

I am more thrilled now, that I lived in a time when this happened; I am more thrilled when NASA sends us pictures of Saturn; and think sometimes, why aren’t we in a state of unrelenting amazement that our species is capable of producing such wonders among the waste and rubbish. 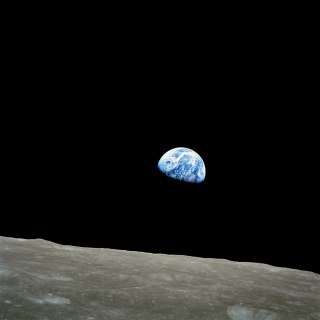 So I’m seeing it as an aesthetic rather than a scientific achievement, since the science and technology are beyond me. This is at a time when visual artists don’t seem concerned with beauty but are supposedly meant to outrage or disturb us – they don’t aim for the sublime. Others will be excited by the physics or the machines. Matthew Walter’s article chimed with me.

The primarily aesthetic nature of the first Apollo mission becomes clearer when one considers it from the perspective of both the participants and the spectators. The lunar landing was not a scientific announcement or a political press conference; it was a performance, a literal space opera, a Wagnerian Gesamtkunstwerk that brought together the efforts of more than 400,000 people, performed before an audience of some 650 million. It was a victory, as Armstrong immediately recognized, not of Western democratic capitalism over Soviet tyranny, or of America over the rest of the world, but for humanity. It belongs to the United States no more than Michelangelo does to Italy or Machu Picchu to Peru. “Gladly, like His suns fly / Through the heavens’ grand plan / Go on, brothers, your way, / Joyful, like a hero to victory,” Schiller begged over Beethoven’s trumpets. The entire world saw three men obey.

He s sees the moon landing as a great work of art, and we can gasp at it as at great works of art, and view it over and over again even though we know the ending. The men walked on the moon and came back, the module clicking into place, and their cocoon capsule splashing safely in to our first home, the sea.