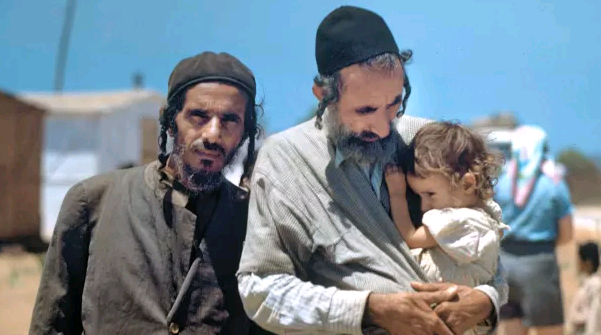 On the 20 May, my friend Hen Mazzig wrote a powerful article in the LA Times titled, ‘No, Israel isn’t a country of privileged and powerful white Europeans’. This excellent article inspired me to explore the issue of the whiteness of Jews further.

Hen wrote eloquently at his dismay at the framing of Israel as a European state when Ashkenazi Jews (i.e. ethnic Levantine Jews who lived longest in Europe after the Roman expulsion) make up only 30% of Israeli society.

Framing Israel as a European state does several things: First and foremost, it erases Mizrahim, Sephardim and Beta Israel Jews through an assumption that all Jewish people have light skin and are Ashkenazi. The reality is anyone with any knowledge of Israeli society understands that it is a Middle Eastern country.  This shouldn’t be surprising as a) all Jews are indigenous to the Middle East and b) Mizrahi Jews lived in the Middle East for thousands of years before being expelled from their respective MENA countries and absorbed into the new State of Israel in the late 1940s and early 1950s.  It is important to note that Jews who never left the Middle East were subject to persecution from their Arab hosts, being viewed officially as a ‘dhimmi. They were treated brutally and were latterly forced from their homes. Hen’s own grandfather was executed by Egyptian forces for ‘being a Zionist spy’.

Mizrahi Jews have made enormous contributions to Israeli society which cannot and should not be erased. While it is important to recognise that there is an intracommunity issue in the Jewish world that can include colorism and hierarchies, as with many ethnic and ethnoreligious groups, the specific issue of “Ashkenormativity” is more related to demographics in the diaspora (80% of American Jews are Ashkenazi). The best way to tackle this is to listen to and value all Jewish voices including  Ashkenazi Jews, Mizrahi Jews, Sephardic Jews, Beta Yisrael & Black Jews. The erasure, ignoring and revising of Mizrahim, Sephardim and Beta Israelim voices can be connected to antisemitic anti-Zionism that strips Jews of their indiginaity to the Middle East. If those on the left argue that Israel is a white colonial state then they have to erase the fact that the majority of Israel’s Jews are from the MENA region. It simply does not fit with their world view. It also worth noting, that the presence of Ashkenormativity doesn’t mean that Ashkenazi Jews are white.

‘Attributing “whiteness” to Jews is more than controversial, for it assimilates the most persecuted minority in European history to the dominant majority, while downgrading the significance of antisemitism.’ – Balázs Berkovits

Revising Jewish ethnicity and history – and more specifically Ashkenazi Jews – as “white” not only erases our indigeneity to the Middle East, but it also erases two thousand years of forced Nomadic life during which white Europeans intensely persecuted and oppressed Jews. This long-tailed history culminating in the Shoah, where 6,000,000 (mostly Ashkenazi Jews) were murdered because they were not white.

Framing Ashkenazi Jews as white doesn’t just denote skin colour, it suggests that Jews ‘occupy powerful and dominant positions in society.’ In terms of financial power, it is important to note that between 16 and 20 percent of American Jewish households earn less than $30,000 a year, which is perhaps a surprisingly high percentage for a community that ‘controls the world economy’.

When considering power as meaning freedom from prejudice, it is worth noting the ongoing antisemitic attacks taking place in Crown Heights, Brooklyn or the recent attempted arson attacks at Chabad House in Boston.

It is also worth noting that a new form of antisemitism – emanating from the Left social justice community – revises the historical targeting of light skinned Jews specifically, once again defining the Ashkenazi Jewish community as a race in order to assign sinister powers to them — this time framing them as ‘white Jews’.

It is also worth noting that a new form of antisemitism – emanating from the Left social justice community – revises the historical targeting of light skinned Jews specifically, once again defining the Ashkenazi Jewish community as a race in order to assign sinister powers to them — this time framing them as ‘white Jews’. As Berkovits states, ‘assimilating Jews to whiteness conceived in this manner is not innocent social history.’ By denoting Ashkenazi Jews as white the social justice movement frames us with an inflated privilege, with a narrative that in itself is designed to further antisemitism. It creates a narrative whereby Israel is made up entirely of the 30% of the population that is Ashkenazim (defined as white European) and therefore the issue with Israel is an issue of white on black racism. This is not the case.

Israel is not a European state; the majority of its population never left the MENA region, and for those who were forced to spend circa a thousand years fleeing from danger, continue to live an existence where their ethnicity and existence makes them a target for those who will either never see them as white or never see them as the indigenous Levantine and Middle Eastern people they are.

Ultimately, the most important argument against the ‘whiteness’ of Ashkenazi Jews is the simple fact that Jewish history – supported by archaeology, biology, DNA, archives, artefacts, records as well as Jewish traditions and oral history – proves that all Jews are indigenous to the Middle East, regardless of how some people try to frame us.

This is a guest post by Ben Maxwell Freeman