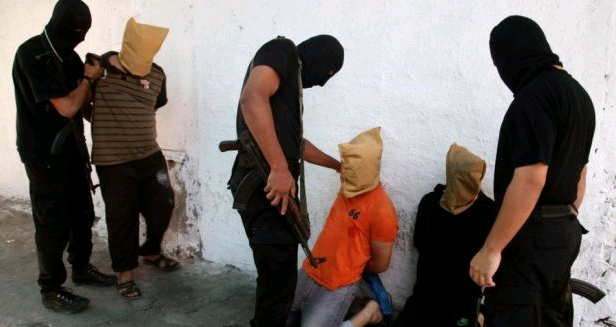 I often think about how hard it must be for Palestinians. On the one hand they have Israel’s security measures on the other they know a much harsher regime awaits were the IDF to leave the West Bank.

With a dictatorship in waiting in the form of the Palestinian Authority and an Islamo-Fascist dictatorship as their Hamas opposition no one who understands the region can argue Palestinians will end up living in a democracy regardless of how things pan out with Israel.

And now Human Rights Watch have released a report claiming the obvious; there is widespread use of torture by both the Palestinians Authority and Hamas.

“In the 25 years since Palestinians gained a degree of self-rule over the West Bank and the Gaza Strip, their authorities have established machineries of repression to crush dissent, including through the use of torture.”

Neither the governing forces in the West Bank or Gaza are open to criticism:

“In detention, security forces routinely taunt, threaten, beat, and force detainees into painful stress positions for hours at a time.”

Of course Israel has been saying this for decades but no one wanted to listen. It’s about time someone started paying attention.