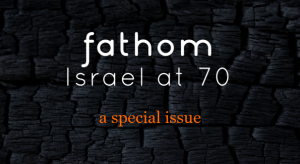 New to Fathom Journal‘s Israel70 special issue is six young Israeli leaders on their hopes and aspirations for the country.

Tal Harris, spokesperson of MK Amir Peretz, argues the greatest challenge that Israeli society faces in the coming decade is finding a way to incorporate its Arab minority in the economic and political spheres.

Rob Pinfold, Neubauer Research Associate at the INSS, argues Israeli policy vis-à-vis the West Bank is really a bitter struggle about identity and values within Israel itself. Pinfold believes that Israeli decision-makers cannot continue to defer the final-status of the West Bank and delineations of domestic order within Israel.

Tel-Aviv Widrich, director of operations for Darkenu, argues that the moderate majority in Israel must not remain silent over the next decade, otherwise Israel will continue to be a marginalising country that is unable to resolve its longest and most challenging issue: the occupation of the Palestinian people.

Hen Mazzig, Israeli writer, speaker and activist. As a Mizrahi living in Israel, Hen longs for the day that a leader of Middle Eastern descent emerges to lead the Middle Eastern country of Israel.

Aaron Kalman, diplomatic adviser to Minister Naftali Bennett and former Jewish Agency Emissary to Australia, argues that the biggest challenge facing Israel in the coming decades is the lack of trust between various sectors and political camps.

Netta Geist, former Parliamentary Advisor to MK Stav Shaffir, writes that the Israeli youth’s growing disillusionment of stagnate politics is forcing them to turn toward the private sector for new and creative ideas in how to live their lives, changing Israeli society from a socialist ethos to an ethic of possessive individualism.

One Day in Gaza: We are all Israelis