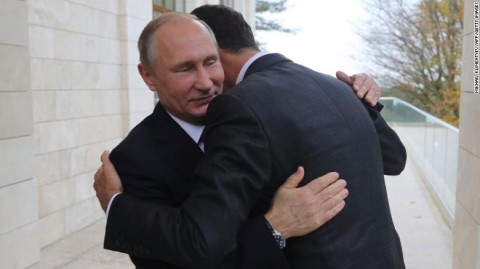 Putin did more than anyone to keep the butcher Assad in power.

Vladimir Putin and Bashar al-Assad, the Black Sea and a balcony corner of the Bocharov Ruchey State residence in Sochi, a favorite of the Kremlin head. You can also see one of Putin’s many luxury watches peeking out from under his shirt, this one perhaps a Blancpain $10,000 piece, one that is often spotted on his wrist, according to activists.

Yet the context is as important as the timing. On Wednesday Putin is due to welcome Iran’s Hassan Rouhani and Turkey Recip Tayyip Erdogan — a noticeably small list of guests that leaves out the US and Europe — to the same Black Sea resort to discuss a political settlement in Syria.

That brave Syrians (at least those who are still alive) who took to the streets peacefully in 2011 to oppose Assad’s regime, only to be met with brutal repression, are now faced with a “settlement” imposed by these creeps makes me extremely sad.

And the failure of the US and Europeans to sufficiently support the Syrians who have opposed both Assad and the Islamic State makes me sadder still.