It’s a common criticism that Muslims fail to integrate, and Christmas is a favourite focus for this kind of angst.  The suspicion that  Christmas is being replaced by ‘Winterval’ is one old chestnut. A few years ago the Muslim Council of Britain produced a humorous poster aimed at calming the fears of those who thought Muslims wanted to ban Christmas.

You might think that those with such suspicions would be delighted to see evidence of a high profile Muslim joining in Christmas festivities.  However Nadiya Hussain, the former GBBO champion, attracted some hostile responses when an article revealed her family’s elaborate Christmas preparations. Here’s a flavour via this report by David Levesley. 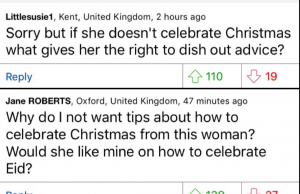 As well as being apparently stuck in a ‘damned if they do, damned if they don’t’ trap, Muslims like Nadiya may be caught in another kind of double bind. For some Muslims would find themselves in broad agreement with those Daily Mail readers.  This comment, for example, could almost have come from a 5Pillars reader, with its emphasis on appeasement.

“How can you give tips on a Christian festival you don’t acknowledge?” asks Princesspixie from Truro. “More appeasement..”

Of course some Muslims just don’t do Christmas without being in any way extreme. But for others it’s part of a wider hardline agenda. Here’s just one (there are many) example of an Islamic preacher exhorting Muslims to shun Christmas using language of separation and supremacism:

This is another ironic example of  anti-Muslim bigotry offering a distorted echo of the rhetoric of Islamists – and Muslims like Nadiya get caught in the middle.