This is a cross-post by Rob Francis

Sometimes, when you walk through the beautiful streets and alleyways of Sarajevo’s Baščaršija, you might come across a patch of red resin in the concrete underfoot. These are “Sarajevo Roses”; scars in the ground where a mortar shell fired by Bosnian Serbs landed, later filled in with resin to mark the place where lives were lost in the explosion.

In the Old Town, there is a museum dedicated to the horrors of Srebrenica and the Bosnian war. On a large screen, you can see footage of Bosnian Serbs sniping at pedestrians in Sarajevo. The shooters would target one person, then stop firing and wait for someone to come to the victim’s aid. At this point, the snipers would shoot both the original victim and the rescuer dead. Eyewitnesses speak of how they saw parks hit with mortar shells as children played.

You can go to see what is left of the Sarajevo Tunnel; constructed during the siege, it allowed food and humanitarian supplies past the Serbian forces and into the city. As you make your way to the Tunnel Museum from the Old Town, you pass along “Sniper Alley”, where damage to buildings from the war is clearly visible.

The siege of Sarajevo lasted nearly four years and claimed the lives of thousands of people. Visiting Sarajevo, talking to its residents, the history and the horrors of the war are very evident.

It seems unthinkable that anyone could possibly deny what happened. And yet it is depressingly common.

This tweet, nonsense in every aspect, dates back to December last year. The reason this particular one is relevant now is because of this. 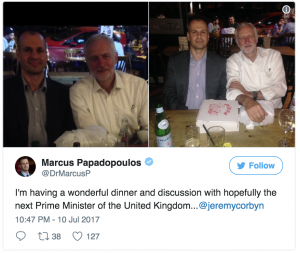 Now of course, it’s certainly possible that Jeremy Corbyn has no idea who this man is, or what his opinions on the Bosnian war are. Fine. But it’s certainly worth at least noting three things.

First, that Marcus is certainly a fan of Jeremy’s, and it might be apposite to ask why. Second, Marcus is not the only Corbyn supporter who also happens to deny war crimes in the former Yugoslavia. What draws them to support him? And third, even if Corbyn didn’t know, it’s more than likely that he and Papadopoulos would find common ground on those issues.

The Labour leader signed an EDM retrospectively opposing intervention in Kosovo in 2004, and had little to say on the Bosnian conflict except to argue that the western intervention which ended the conflict was for strategic geopolitical and economic reasons rather than to prevent further massacres. In the run-up to June’s election, Corbyn went so far as to say that Britain had not fought a just war since 1945.

This matters. Denying that Sarajevo was under siege, or that there was genocide at Srebrenica, matters. Not just because it is sick to do so whilst many people in Bosnia saw loved ones die in the war, or live with horrific memories of what happened. Not just because genocide denial is always wrong. But because of why it is done, and because of the implications.

Srebrenica denial is most common amongst anti-western and isolationist ideologues, because to deny or minimise the crimes is the only way for it to fit with their worldview; they believe that western intervention in other countries is always, always wrong, that the west is the source of all conflict in the world, that Britain has not fought a just war since 1945. 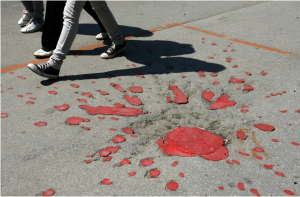 Srebrenica, instead, punctures this notion. It shows us that terrible atrocities may sometimes be prevented by taking action; soon after NATO got involved in 1995, a ceasefire took effect and the war was over. Similarly, Kosovo and Sierra Leone are success stories, where lives were saved, where children are even named “Tony Blair”. For this reason, anti-western ideologues must diminish the very real achievements of these interventions, must downplay the Bosnian suffering; the narrative that western interventions can be a force for good must be crushed.

For all of Corbyn’s talk of desiring peace, he has never yet been able to state what he would do about a tyrant with the capacity and determination to slaughter thousands and had no interest in dialogue. If he were being honest, he would say that he would refuse to get involved, and leave innocent people to suffer; that is where his politics leads.

I write this twenty-two years to the day since the Srebrenica atrocities began. It is also one week short of twenty-three years since the Rwandan genocide finished. Those horrible atrocities should have taught us that if we can help, we should do so.

Jeremy Corbyn may one day be Prime Minister; it matters that he thinks the way he does, and associates with the people he does. Sadly, but inevitably, there will be more Slobodan Milosevics and Ratko Mladics in the future. We must be willing to stop them. 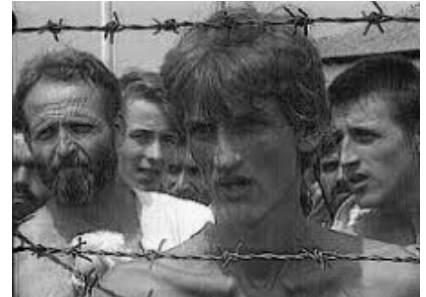