Azad Ali of the Islamist political group MEND and the Salafi hate preacher Haitham al-Haddad want you to vote. 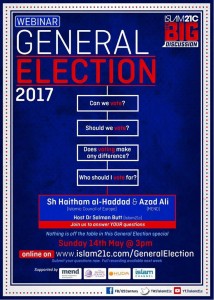 The “community” can win here, Haddad said in the webinar held on May 14 with support from MEND. And what a prize it could secure. Maybe up to 30 “good Muslim” MPs who are ours, ours alone, and do not serve “other communities”:

So is my idea clear that actually we should have 20 Muslims who represent us, OK, who take our voice to the Parliament. At least 20, you know. Plus, plus, I know, sometimes we feel shy that no we are not talking about Muslims, you know, representing us. Why not? This is democracy, this is my country.

…they should come strongly and say that, well, I’m representing my community, whom do you want me to represent? To pass what maybe other communities want? What’s the point?

At present, however, Mr Haddad is disappointed with some of the Muslim MPs in the last Parliament. You see, “some of them, they are anti-Muslim, as we all know.”

He expands on this theme in another video from 2013. Muslim MPs voted for same sex marriage? Really? Yes, a majority of them of them did just that, wa alhamdulillah, as they say.

Though Mr Haddad would not say that. Oh no. It’s all takfiri hellfire for the yes voters, really. To summarise Mr Haddad’s words on what he terms these “so-called Muslim MPs”:

– They should be brought before an “Islamic body” charged with deciding whether they are Muslims or not.

– If they do not repent for “leaving Islam”, they are bound for the hellfire.

– In this life, those who do not repent must be shunned even by their own families.

– When the hellfire time comes, they should be denied Muslim funeral prayers and burials.

– No, there is no forgiveness for them. Do not pray for this. It is forbidden.

Don’t forget Mr Haddad’s clerical Nazi vision for Muslims who do leave Islam. It’s death, of course. Even the quiet ones will be spotted if they simply stop wearing the hijab or praying at the mosque. Then they will be killed.

At least there is some humour in matters Haddad. Here his Islam21C operation advertises another seminar titled “Is Radicalisation Real?” Ho ho, yes, look at your guests! They include Haddad, Asim Qureshi of Cage, and Salman Butt, “Chief Editor” of Islam21C. I love the “Building 7” 9/11 truth nonsense. Mashallah, that’s worth some seriously posh baklavah.

Even better, Salman Butt is the man who has sued the government for naming him as an extremist. See him here promoting Abu Abdissalam, Sulaiman Ghani, Haddad, Uthman Lateef, Abdur Raheem McCarthy, Asim Qureshi, and Adnan Rashid, among others. A crowd with this many stoners really should play Glastonbury.

Now I don’t think what looks like a blue electoral tsunami heading for these shores will be very good for Messrs Haddad, Ali et al.

In any case, from June 9 those of us who oppose clerical fascism will be ready, willing and able to deal with the flotsam and jetsam that may remain.