This was the topic of Ilan Pappe’s talk on Tuesday evening at UCL (another ‘Apartheid Week’ event – on the strength of this talk, there is really no question).  It was a real gathering of the Israel-traducing clans, including the Trotskyist John Rose, author of ‘The Myths of Zionism’.

Ilan Pappe published his book “The Ethnic Cleansing of Palestine” in 2006. It has been widely criticised as dishonest.  See here how Pappe is accused of rewriting history (It compares his book  with newspaper archives). Pappe’s hysterical thesis – that Israel ‘ethnically cleansed’ half the Arab population in 1948 – has been comprehensively disproved, for example by Efraim Karsh in 2008:

Incredibly Pappe on Tuesday said ‘Israel in 1948 was as bad as Daesh today’.  Let’s remember that in 1948, the Mayor of Haifa, Shabtai Levy, pleaded with the Arabs to stay.  How on earth does this compare with the atrocities perpetrated by Daesh?

Benny Morris said of Ilan Pappe: “At best, Ilan Pappe must be one of the world’s sloppiest historians; at worst, one of the most dishonest. In truth, he probably merits a place somewhere between the two.”

Pappe further disgraced his academic status by his approbation of Thomas Suarez’s racist apology for a ‘book’ : ‘A tour de force, based on diligent archival research that looks boldly at the impact of Zionism in Palestine and its people in the first part of the 20th century. The book is the first comprehensive and structured analysis of the violence and terror employed by the Zionist movement and later the state of Israel against the people of Palestine. Much of the suffering we witness today can be explained by, and connected to, this formative period covered thoroughly in this book.’

And remember him on the Al Jazeera ‘Lobby’ programme, saying that the charge of ‘antisemitism’ is being used falsely, “to intimidate Corbyn”!

The security at Tuesday’s meeting was as near as possible on a UK University campus to closing down opposition.  It was reminiscent of the meetings of the former Communist Party of the Soviet Union.  The organisers tried to eject me even before the meeting began. The pretext was that I had the wrong ticket but of course the truth was that they wanted to censor me. No filming was allowed, though that injunction seemed to apply only to the Zionists – at least one anti-Zionist (Naomi Wimborne-Idrissi) filmed freely. 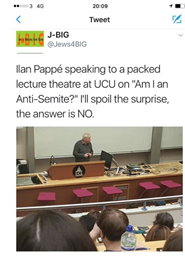 Two security guards in Hi-Vis jackets were present throughout the Q+A. Hecklers (there were none) would surely have been manhandled out. The biased Chair failed to call on me in the Q+A.  Questions not relevant to what Pappe had said were not allowed (so no criticism of his dishonest book, for example).

The Hatefest was presided over by Yahya Abu Seido and Yousef (I think his second name is Anis).  How ironic that they were free to hold this Hatefest when (27 October 2016) they did their best to stop a UCLU Friends of Israel event from happening.

Yahya Abu Seido’s desire that Israel be destroyed is laid out here.  He was one of the leaders of the attempt to stop Hen Mazzig speaking on 27 October. He was caught on camera celebrating what he believed was the success in achieving this.  He was responsible for the people that left Jewish students locked in a room. Those who necessitated a police escort for pro-Israel students and advocates to leave UCL safely on 27 October.   At 12.30 on 27 October in the Quad at UCL, the following conversation with Seido was noted by an Israel activist:

Yahya Abu-Seido: You seem interested, can I help you?
X:No, I’m fine thanks

YAS: Because you’re staring at people, they find it intimidating
X:I hardly think so. Are you going to intimidate the speaker this evening?

YAS (confidently): The talk is not going to happen

YAS – does not answer, turns his back

X:I hope you are not going to do anything illegal

YAS: Don’t worry, we won’t do anything illegal
The drama on Tuesday began even before the start.  I got there early, before the ticket checking started. Yousef and Yahya Abu Seido checked my ticket – and deemed it invalid, asking me to leave and join the waitlist.

Apparently the early bookers (like me – I booked on 8 February, before the date of the meeting was changed from 24 February) were asked to rebook and non-students to pay £5. Well, I never received that message – so I stood my ground.  They threatened me with security. Fortunately a Union sabbatical officer was there to resolve it. The truth – of course- was that they wanted me out – pure censorship.

The meeting started by introducing the Chair, Dr Lee Grieveson, Reader in Film Studies at UCL.  Like the Chairs at the other three IAW meetings I have attended, he was of course irredeemably biased. He has signed anti-Israel letters here and here.

Pappe’s talk was pure anti-Israel vitriol and falsehoods.  His thesis was that Israel was founded by ‘settler colonialists’ and that the Jews righted the wrong done to them by the Nazis by committing another wrong, on the Palestinians (in his talk he repeated the phrase ‘settler colonialism’ 13 times – remember how he organised a hatefest ‘conference’ on the topic at Exeter University in October 2015).   Fifteen years ago pro-Israel people said “don’t criticise Israel, you will damage the peace process”. But now there is no peace process so (according to Pappe) supporters of Israel have to call all criticism of Israel ‘antisemitic’.  Ridiculously Pappe said that Israelis and Zionists define antisemitism as “criticising Jews for what they are doing, even when they are doing something wrong.”

In other words, Pappe did not address the question. Instead he railed at a straw man – our old friend the  ‘Livingstone Formulation’: the charge that Israel advocates use the charge of ‘antisemitism’ to suppress all criticism of Israel.  Of course it is a false charge and those who use it can never – when challenged – provide an example. The IHRA Definition of Antisemitism does NOT attempt to suppress criticism of Israel  – and the allegation that it does is absurd, shameful and ‘Antisemitism Denial’.

The reason Pappe did not address the question is doubtless because of the number of antisemitic remarks that he wished to make.   One of the worst was the suggestion that the solution to the antisemitism of the Nazis was also antisemitic because “people who live in Palestine are also Semites”.  The response “Arabs are Semites too” is used by antisemites to deny Middle Eastern antisemitism. Antisemitism Denial is right up there alongside Holocaust Denial. Pappe also said several times that Israel is a racist state – the IHRA Definition says that to ‘claim that the State of Israel is a racist endeavour’ is antisemitic. Pappe said “For me, Israel is not a Jewish State”; “Is there a legitimacy for a racist state?” And “regimes like the one we have now in Israel cannot exist for very long”.  We also had David Ward-style admonition of naughty Jews for not learning the lessons of the Holocaust: Pappe described how he lost members of his family in the Holocaust and then said “The State of Israel – instead of creating a certain sensitivity toward crimes against humanity, sees it as a licence to perpetrate crimes against humanity. I don’t accept that an abused person is entitled to abuse”. Suggesting that Israel has not learned the lessons of the Holocaust is vile, period – the fact that Pappe lost family in the Holocaust absolutely does not give him licence to say it with impunity. Not only vile but anti-Semitic: To compare Jews with Nazis is antisemitic.

Several people heard one of the audience members made a borderline antisemitic comment too. Naomi Wimborne-Idrissi turned around to the pro-Israel supporters behind her and alleged “the media are all on your side”.

However despite the intimidating security and biased Chair, Pappe did not have it all his own way on Tuesday. The Jewish students there did a ‘silent protest’ with signs (‘Ilan Pappe does not represent me’ plus the name of their institution): 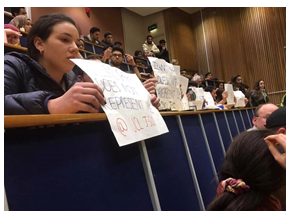 I joined them with this sign, referring to the topic of the meeting and the offensiveness of the suggestion that non-Jews should decide what constitutes racism against Jews: 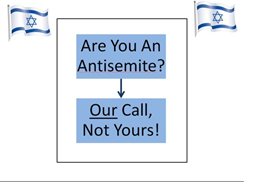 (The footage is on the Facebook page of the organisers).

And the debate after the meeting outside in the yard was fierce and peaceful, with the Jewish students rebutting the lies with passion and knowledge.  Well done guys, you know who you are!

But why could this debate not have happened in the room ……….