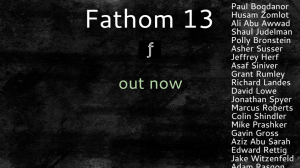 Fathom 13 examines four questions central to explaining the current impasse in the peace process between the Israelis and the Palestinians.

First, where are the Palestinians going?

Husam Zomlot, ambassador-at-large for the state of Palestine and co-ordinator of the Palestine Strategy Group explores the crisis of the Oslo peace process, the radically changed political context of peace-making today, and the new Palestinian strategy which he argues is based on internationalisation, gradualism and non-violence.

Adam Rasgon and Grant Rumley map this internationalisation strategy’s fortunes across the globe and ask whether it can really transform international public opinion and diplomacy and set the Palestinians on the path to statehood. They conclude it cannot.

Ali Abu Awwad is a leading Palestinian activist and the founder of Roots – an Israeli-Palestinian project in the West Bank that works for co-existence by changing peoples’ narratives and by transforming the relationship between the two peoples. He sat with Fathom deputy editor Calev Ben-Dor to discuss ‘the missing Palestinian non-violent movement’. Aziz Abu Sarah, a Palestinian from Jerusalem, has pioneered and managed many projects in conflict resolution and community relations. He spoke to Fathom editor Alan Johnson.

Second, where are the Israelis going?

Polly Bronstein introduces a new Israeli organisation. Darkenu styles itself as the movement of Israel’s moderates. She argues that while Israel was created out of nothing, from the collective dream of a persecuted people, the country’s future is now in the balance and its future direction will be determined by the collective action of ‘moderate Israel’. ‘We are the people we have been waiting for,’ she says.

Shaul Judelman is Ali Abu Awwad’s Israeli partner in Roots. He is a Jewish Israeli living in the Gush Etzion settlement and he is the co-coordinator of Roots – a grassroots movement of understanding, nonviolence and transformation among Israelis and Palestinians which aims to shift hatred and suspicion towards trust, empathy, and mutual support. He sat with Fathom assistant editor Calev Ben-Dor to talk about his journey to non-violent peace activism and his thoughts about the political future.

Mike Prashker, author of a forthcoming book, A Place for Us All – Social Cohesion and The Future of Israel, argues that healthier social cohesion based on shared citizenship is now an existential need for Israel. In the past Israel’s tribes were far smaller, inward-looking, and insulated; friction was consequently limited. In 2016, however, 8.5 million Israelis happily aspire to first-class citizenship; the mythical campfire of old is unprecedentedly crowded, unruly, and competitive as Israel’s tribes collide as never before. This is a promising but perilous moment in Israel’s democratic journey, a fateful crossroads between tribal fragmentation and civic accommodation. Ed Rettig of rabbis for Human Rights reflects on the debate in Israel about the death penalty. In a chaotic and morally obtuse situation, little understood by outsiders, he argues, Israel must still try to follow the Divine example of loving humanity.

This May witnessed the annual Tel Aviv International Documentary Film Festival, an event dedicated to the development and the promotion of the art of documentary cinema in Israel. Gavin Gross provides a colourful synopsis of the best documentaries aired over the last 10 days, as well as this year’s competition winners.

Jake Witzenfeld, director of the documentary Oriented, talks about the struggle of Naeem, Fadi and Khader – the three young gay Palestinian subjects of his bold and beautiful film – to define their complex identities. Not another cliched story of a Jew and an Arab, Witzenfeld goes where the action is: ‘It is fascinating to see how people respond when you try to remix their settings,’ he said. ‘Some people become very uncomfortable, but others are inspired.’

Third, how does delegitimisation damage peace-making?

The environment needed for peace-making is almost impossible to create while the Jewish homeland is demonised and delegitimised by global civil society. Four pieces in this issue map the aspects of the historical roots and contemporary dynamics of that delegitimisation.

Jeffery Herf is Distinguished Professor of History at the University of Maryland. He spoke to Fathom editor Alan Johnson about his new book Undeclared Wars with Israel: East Germany and the West German Far Left 1967-81. The editors hope this important interview about a major historical work gets the widest possible circulation. For as Herf writes, ‘the idea that seeking the destruction of the Jewish state has nothing to do with the Jews is one of the central leftist delusions of this era.’

In a bracing polemic, the US academic Richard Landes argues that the demonising anti-Zionism of what he calls the ‘global progressive left’ – whatever the intentions of its supporters – acts as an enriching and disseminating agent for Jihadi Jew-hatred, itself closely related to the eliminationist anti-Semitism of the Nazis.

The former mayor of London Ken Livingstone has defended his explosive his claim that Adolf Hitler was ‘a Zionist’ by citing Lenni Brenner’s book Zionism in the Age of Dictators. According to Livingstone – now suspended from the UK Labour Party – ‘Lenni’s book shows a shared common belief between the Nazis and the Zionists … they wanted to preserve their ethnic purity and that’s why they had a working relationship.’ In this comprehensive critique Paul Bogdanor skewers Brenner’s many factual manipulations and pseudo-scholarship and explains why his work is a fixture of antizionist and antisemitic propaganda about the Holocaust on both the far left and on the far right, avidly followed by those convinced that ‘Zionists’ are to blame for all evil in the world. Jeffrey Herf, author of the award winning book Jewish Enemy: Nazi Propaganda during World War II and the Holocaust, also exposes the historical inaccuracies behind the claims of Livingstone.

Colin Shindler reviews Socialism of Fools: Capitalism and Modern Anti-Semitism by Michele Battini. The book shows how, after the European Enlightenment facilitated the Declaration of the Rights of Man and the Citizen in France, and removed the centuries-old barrier between Jewish communities and the Christian societies in which they lived, the counter-revolutionary answer to this breaking of the chains was to identify Jewish financiers with the new capitalism in the 1790s and to make the Jews scapegoats for financial speculation; in essence to update the stereotype of medieval Jewish usury to a modern anti-Jewish anti-capitalist one. The roots of left-wing antisemitism are deep.

Fourth, what impact is the collapse of the Middle East having on prospects for peace?

It is 100 years since the signing of the Sykes-Picot Agreement – the division of the territory of the Ottoman Empire into states overseen by Britain and France. Asher Susser, the Stanley and Ilene Gold Senior Fellow at the Moshe Dayan Center for Middle Eastern Studies at Tel Aviv University, critically examines the legacy of the agreement for today’s Middle East. he argues that the underlying assumption of Sykes-Picot, that Western-style secular nationalism would override sectarian identities, was the biggest mistake in Western thinking about the Middle East in the 20th century.

The Fathom editors hold a monthly invite-only round table discussion in our London office between a policy expert and a group of opinion-formers. In May, Jonathan Spyer, Director of the Rubin Center for Research in International Affairs, a centre located at the Interdisciplinary Center, Herzliya (IDC) – and one of the few policy experts to regularly visit the front lines and talk to the warring factions – mapped the current state of the Syrian conflict and its implications for Israel.

David Lowe reviews The US-Israel Relationship from Truman to Obama by Dennis Ross, and argues that at a time when the level of turmoil in the Middle East continues to rise, future US presidents will, like their predecessors, appreciate the substantial dividends the relationship with its most reliable ally in the region continues to pay.

Finally, as part of Fathom’s ongoing mapping of UK-Israel relations, we examine two political figures, one a towering politician of the past, one who has a shot at being a politician of global significance in the future.

Asaf Siniver is Reader in International Security at the University of Birmingham. His new biography of Abba Eban tells the story of an entirely exceptional man who by the age of 35 was Israel’s Ambassador to both the United States and the United Nations. Having graduated from Cambridge with a rare triple 1st in Classics and Oriental Languages, Eban served in British Army intelligence during World War Two, and later as a Liaison officer between the Haganah in Palestine and the British Secret Service. In 1959 he entered Israeli politics as a member of Mapai and served as Foreign Minister between 1966 and 1974. Siniver spoke to Calev Ben-Dor is deputy editor of Fathom.

‘Yes, but is it good for the Jews?’ goes the classic question, often used ironically, to ask what the effect of a given event will be on the Jewish community. As the first Muslim to be elected mayor of a major Western city, Sadiq Khan is acutely aware of both the hopes and the fears his election raises. Marcus Roberts, campaign manager for Khan’s Labour primary victory, argues that even the most cursory examination of the new mayor of London reveals a clear answer: yes.