Here are Jeremy Corbyn’s comrades from this year’s May Day rally in London, where he reassured those listening that he opposed antisemitism and all forms of racism:

Corbyn is surrounded by CPGB-ML flags: 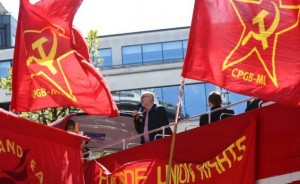 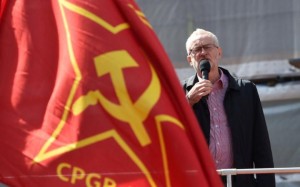 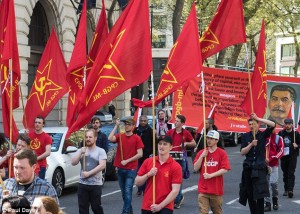 They quickly started chanting against Israel:

Israel is a racist state!”

You see the flags belong to the Communist Part of Great Britain (Marxist-Leninist); or CPGB-ML for short.

Harpreet Brar is the founder of the pro-North Korea party, and his daughter Joti Brar is an active member.

She published an article for the website of Holocaust revisionist Gilad Atzmon (who says throwing Jews into the sea is unfair on the sea, the Jews provoked the Nazis, Hitler will be proved right), about how the PSC should not be removing Holocaust deniers from its midst:

I went to a meeting on Tuesday night of my local Palestine Solidarity Campaign group. We were there to talk about various motions for the upcoming PSC AGM on the subject of ‘anti-semitism’, and ‘holocaust denial’, alongside a proposed constitutional change that would take away the right of an expelled individual to appeal to the members at an AGM in the future.

The new rumours are variations on a theme whereby independently-minded activists who aren’t ‘on message’ with the leadership’s agenda are alleged to have been removed from positions of influence in PSC branches following zionist-inspired accusations of ‘anti-semitism’ and ‘holocaust denial’.

“it is the zionist hype machine that has conflated the two as interchangeable terms and created an atmosphere in which anyone is branded an ‘anti-semite’ who questions anything about Israel, including the founding myths concerning the supposedly unique suffering of jews and the alleged impossibility of jewish people living free from persecution anywhere outside Israel.

To those with a basic grasp of history, it is clear that the jewish holocaust did actually take place. To those with a basic grasp of the workings of imperialism, it is equally clear that the same racist scapegoating that led to the German extermination of European jews has been reborn in Israel’s treatment of Palestinians in particular and Arab and muslim peoples in general.

That being the case, and in a world where zionism has arrogated to itself both the right to speak for all jews and the right to speak on behalf of all jewish holocaust victims, even while perpetrating its own holocaust against the Palestinians, the rise in anti-jewish sentiment is hardly surprising, and nor is the rise in numbers of those who are questioning the truth about the holocaust. When so much of what Israel projects (the only democracy in the Middle East, a bastion of civilised values, etc etc) is revealed to be a lie, why wouldn’t people also start to wonder whether the whole Holocaust story, so central to the image that Israel projects to the world, might also be untrue?

And so ‘Holocaust denial’ has become an unfortunate by-product of what Norman Finkelstein aptly termed ‘The Holocaust Industry‘ – the zionist promotion of the myth that the jewish holocaust was somehow different from all other episodes of extermination in human history, and that this unique suffering justifies both the creation of Israel and any crimes the zionist state may commit in alleged ‘defence’ of its existence.

Moreover, it’s increasingly well understood that the early zionists were quite happy for the holocaust to go ahead if it was going to create jewish refugees who would make their way to Palestine. Hardly surprising then, that many who don’t understand imperialism’s role in the Middle East and in the foundation of Israel question the validity of the Holocaust industry’s myths about jewish suffering and are prey to conspiracy theories about an alternative narrative to the holocaust, as well as to myths about a ‘jewish power’ that controls world finance and politics and protects the Israelis from world public opinion.

So racism and ‘holocaust denial’ are clearly NOT the same thing, while Holocaust ‘minimising’ is even more troublesome to pin down. Are we to take the zionist definition that anyone who asks a question about the Nazi extermination of jews is automatically an anti-semite and therefore a racist? If someone suggests that they think perhaps five million jews were killed by the Germans and not six, is that person guilty of the abhorrent crime of ‘minimising the holocaust’ and worthy only of being hounded out of the PSC, unable to contribute anything useful to its work?

Here she says the Palestinians are ‘resisting Israel in every way we can, they need us to join with them, and together we can defeat Israel’:

May Day is an opportunity for groups like CPGB-ML to hand our their noxious literature, and the attendance of Jeremy Corbyn gives their whole enterprise, essentially, an air of greater legitimacy. Here is one CPGB-ML pamphlet:

In return for helping corporations like BP and Texaco to carry on looting the oil and dominating the people of the whole region, the zionists are given money, military technology, diplomatic immunity, and the backing of a campaign of lies and disinformation in the imperialist-controlled media

Israeli children are brought up to be Nazi-like stormtroopers, their heads filled with supremacist hatred of all Arab peoples

“Instead of passively joining the long list of imperialist victims, the Palestinians became a beacon of resistance and an inspiration to oppressed people globally. It is this resistance that is the key to defeating zionism. The heroic 67-year resistance of the Palestinians to zionism by every means at their disposal has frustrated British and US plans for total domination of the Middle East, exposed the real nature of fascist Israel, and steadily destroyed Israel’s moral standing in the world. Gradually, the wellspring of sympathy that Israel shamelessly exploited following the Nazis’ mass extermination of jews in WW2 has run dry. As every agreement and concession on the part of Palestinians is greeted with fresh Israeli crimes, it has become clear to all that it is the zionists, and not the Palestinians, who stand in the way of peace. So brazen has its war machine become that, today, Israel is the number one creator of anti-jewish feeling in the world.”

More highlights of the CPGB-ML:

However, even worse disasters await the zionists should they be tempted to resolve the stand-off by a ground invasion – as the US itself has been finding out in Afghanistan, Iraq and Libya.

Worse still for Israel, advances in the range of resistance missiles mean that it is no longer possible for Israel to bomb Palestinian families with impunity whilst settler families get on with their cushioned lives uninterrupted. Morale in the zionist state is at an all-time low, as the stigma of living in the world’s No 1 pariah state is compounded by the fear that the Palestinian people’s resistance can no longer be contained.

For these reasons, and despite the massive overall imbalance in military equipment, the resistance is refusing to be panicked by Tel Aviv (or coaxed by Cairo) into agreeing to peace terms that will leave Israel free to carry on as before. As a Hamas spokesman put it, the leadership will sign up to a ceasefire only when Israel “stops its aggression, ends its policy of targeted assassinations and lifts the blockade of Gaza”.

Or as Islamic Jihad expressed it: “We don’t fear them, the resistance is too strong and capable of confronting them. We hit the belly of Israel. The prime minister and leaders of Israel were forced to go to shelters. Israel wants calm. Egypt wants to stop the bloodshed. We also want to preserve our dignity … The siege on Gaza should be lifted, the crossings should be opened … We will not accept a humiliating offer.”

The PFLP’s statement hit a similar tone: “As the enemy continues its crimes, we call to confront the occupiers and their threats, to form a resistance front for a unified national defence … Our people and our resistance will inevitably prevail. All greetings and glory to … all of the fighting armed organisations and to the revolution and resistance everywhere in Palestine … Victory is inevitable.”

All power to the Palestinian resistance!
Death to zionism! Death to imperialism!
No cooperation with zionist war crimes!

Will the Labour Party launch an enquiry into the May Day parade’s antisemitism now?