It’s appropriate that “kowtow” is a word of Chinese origin, because that’s exactly what the rest of the world is doing to the Chinese regime.

Amid extraordinary moves to rein in criticism at home, Chinese security personnel are reaching confidently across borders, targeting Chinese and foreign citizens who dare to challenge the Communist Party line, in what one Western diplomat has called the “worst crackdown since Tiananmen Square.”

A string of incidents, including abductions from Thailand and Hong Kong, forced repatriations and the televised “confessions” of two Swedish citizens, has crossed a new red line, according to diplomats in Beijing. Yet many foreign governments seem unwilling or unable to intervene, their public response limited to mild protests.

The European Union is divided and appears uncertain about what to do. Hong Kong is in an uproar, with free speech under attack, activists looking over their shoulders and many people saying they feel betrayed by a lack of support from Britain.
…..
With Secretary of State John F. Kerry in Beijing, where he landed late Tuesday, the leaders of the Congressional-Executive Commission on China, an independent U.S. government agency, have voiced alarm. The body’s chairman, Rep. Christopher H. Smith (R-N.J.), said Friday that President Xi Jinping’s push toward “hard authoritarianism” threatens U.S.-China ties, a view echoed by his co-chairman, Sen. Marco Rubio (R-Fla.).

I’d take Rep. Smith more seriously if he hadn’t done his share of kowtowing to the increasingly authoritarian government of Viktor Orban in Hungary. And Rubio seems willing to cut our “our Sunni allies, the Saudis” some slack despite the kingdom’s horrific human rights record.

But the biggest blusterer of all when it comes to China is Republican presidential frontrunner Donald Trump, who accuses the country of stealing American jobs and talks about cracking down on China’s trading violations (which certainly exist) and “Reclaim[ing] millions of American jobs and reviving American manufacturing by putting an end to China’s illegal export subsidies and lax labor and environmental standards. No more sweatshops or pollution havens stealing jobs from American workers.”

Trump’s anger about Chinese manufacturers depriving Americans of jobs would be more credible if not for things like this: 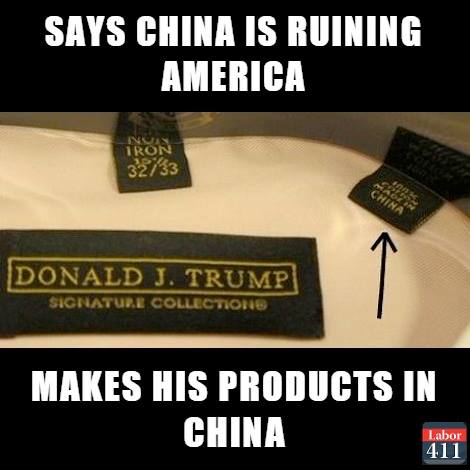