A lot of the support for Republican “outsider” candidates for president comes from working people who are rightly angry that while the economy has improved steadily since the depths of the 2008-2009 Great Recession, and millions of new jobs have been created, they are not feeling significantly more secure or prosperous.

Both Donald Trump and Ted Cruz (one of whom now appears likely to be the Republican candidate for president in 2016) have benefited from this anger. But, as Ed Kilgore notes, there is a huge gap in their assessment of the blame for this problem.

Even where these candidates oppose a “business community” agenda item, their opposition is not aimed at the corporate beneficiaries, but at other objects of rage or fear, such as immigrants exploiting “porous borders” or crafty foreign governments planning to batten on some unfair trade agreement. And it is very, very difficult to find a criticism of pro-corporate public policies that are not definable as “crony capitalism,” offering specific companies a market-thwarting advantage over others via subsidies or some other preference. The idea that there are areas where markets don’t work and/or where Americans need protection from corporate predators (whether it’s their own employers or major titans who affect the broader economy) is entirely absent from GOP rhetoric. You are left with the impression that absent government intervention corporations like Koch Industries would be able to make life in this country, well, if not Edenic, then infinitely more prosperous and efficient.

And so, as candidates in both parties conduct a wide-ranging debate over the various interests that have at least partially spoiled the American Dream, there’s a gap in the GOP discussion that’s as obvious as a lost front tooth: Somehow corporate “job creators” never share responsibility with lazy welfare bums and freeloading immigrants and police-hating minorities and feminist baby-killers and Muslim-loving anti-Semites and every single organ of domestic government that is not being systematically degraded by conservative ideologues. In the Year of Anti-Elite Anger, the elites who collectively own much of the country are being given a pass by one of the two major parties so long as they do not consort with any other enemies, particularly government. It’s a phenomenon you’d think Democrats — whose disagreements over exactly how much blame for economic crises and inequality banks and corporations should bear and what to do about it get so very much attention — might want to mention a bit more often.

So the Republican “anger agenda” notably ignores the fact that corporations’ profits have steadily increased while compensation for their employees has stagnated or decreased.

Here are some graphs (click to enlarge) which help explain the reality a lot better: 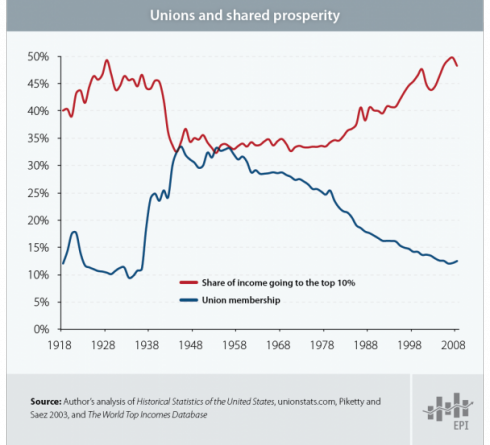 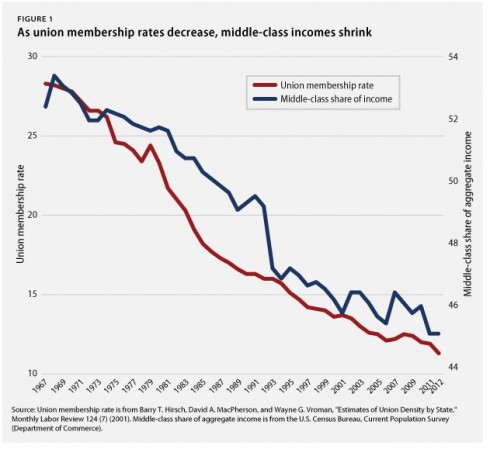 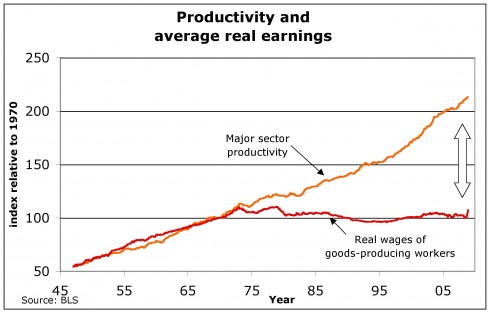 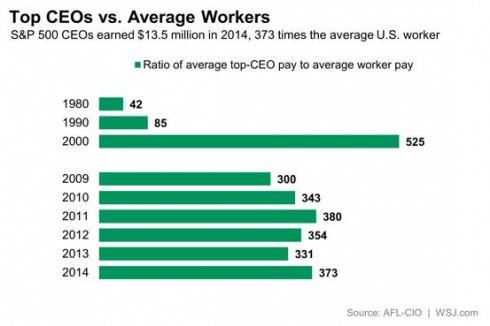 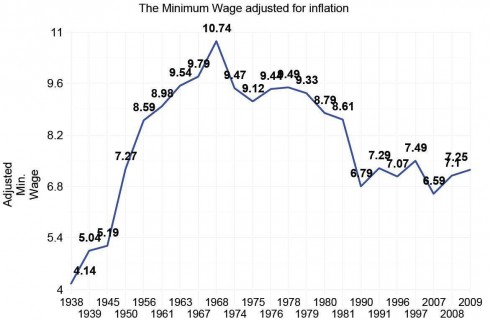 In short: Companies are sharing a much smaller percentage of their profits with their employees (except for those at the very top), while a decline in trade union strength has made it impossible for workers to bargain for a fairer share, even as their productivity increases. Meanwhile the inflation-adjusted minimum wage declined by nearly one-third between 1968 and 2009.

And sorry, no: you can’t blame this totally, or even largely, on “hordes” of illegal immigrants or “porous” borders.

Update: From the perspective of someone who dreads the possibility of either one of these guys becoming president of the United States, my unbiased opinion is that Donald Trump seriously kicked Ted Cruz’s ass here: