Yesterday the Times reported on a speech made by John McDonnell back in 1986.

John McDonnell called for the “ballot, the bullet and the bomb” to unite Ireland at the height of the IRA’s terrorism campaign against Britain, The Times can reveal. The shadow chancellor also suggested, with black humour, that Labour councillors who refused to meet the IRA’s political wing should have their knee-caps shot off.

Mr McDonnell was speaking as part of a tour by Sinn Fein of Labour councils in London that he helped to organise. Among his guests was a republican convicted of a terrorist car bombing. The Irish Democrat newspaper said at the time that the political wing of the IRA was “engaged in a large-scale propaganda exercise with the help of the Labour committee on Ireland”.

The quote is clearly taken out of context — John rejects all forms of violence and has done so all his political career.

Last night on Question Time Ken Livingstone said the 7/7 bombers ‘gave their lives’ for their cause.

‘They gave their lives, they said what they believed. They took Londoners’ lives in protest at our invasion of Iraq.’

(You can watch the clip here.) His remarks have been widely condemned by politicians from all parties.

Meanwhile Corbyn faces rebellion from members of his Shadow Cabinet over his stance on Syria.

Mr Corbyn’s decision to write to Labour MPs setting out his opposition – before the shadow cabinet had reached agreement – was criticised by a senior shadow minister.

They told the BBC: “There will be resignations among senior members of the shadow cabinet over this.”

Further anger was caused when Corbyn wrote to Labour MPs stating categorically that he could not support the action Cameron proposes, even though he had just agreed to postpone a decision on the party’s stance until after the weekend.

It is understood that Mr Corbyn did not even tell Hilary Benn, his shadow foreign secretary, that he was dispatching the note, which emerged last night after Mr Benn said there was a “compelling case” for backing airstrikes.

Diane Abbott, one of the leader’s allies, warned fellow shadow ministers to remember that their jobs were in the gift of Mr Corbyn, adding: “He is the one with the electoral mandate.”

(Here is an archive clip of Abbott’s take on Chairman Mao – apparently he did more good than harm.)

Corbyn has cancelled a campaigning trip to Oldham where Jim McMahon, the Labour candidate who hopes to win Michael Meacher’s seat, has seen odds on a UKIP victory go from 8/1 to 5/2.

Alec adds: It was taken out of context! It was a mistranslation! Oh, it was in English. Whoops. 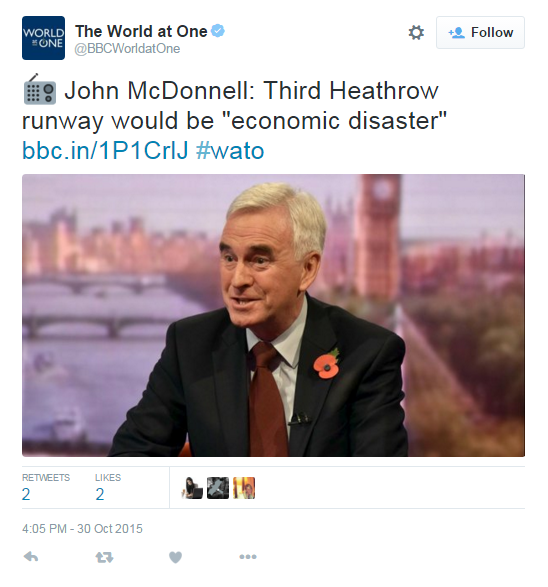 Presumably hence his support for the terror group which shelled the other two runways two days running when he was candidate for the local constituency.