It’s 2012 and Tower Hamlets council – which, as you may remember, was at the time run by a dubious group with links to Bangladeshi Islamists – orders the removal of this mural: 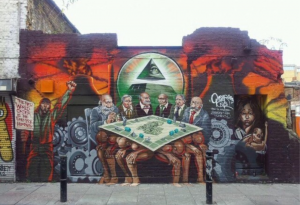 It’s not really hard to guess why. I mean, even the most charitable of us could see that a picture of a bunch of large nosed businessmen sat around a table made from the bodies of the poor, plotting their rule of the world, may be a teensy weensy bit “problematic”, as I believe the kids have it.

The artist in question – in true tabloid terms – “takes to Facebook” to angrily protest it being taken down. And in the thread of comments that follows, a voice pops up. An MP from a near-by constituency. 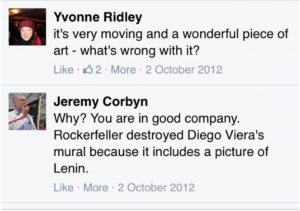 Now. Leaving aside the conflation of this paranoid stoner’s work with Diego Rivera, the thing that stands out for me here is the opening – “Why?”.

When the Labour leadership election was in full swing, a lot of people misidentified as “Blairites” or “neo-liberals” (the latest meaningless buzzword that seems to encapsulate “everything I don’t like”, like its comrade-in-arms “Zionist” but with the racial element removed) asked some serious, hard questions about Jeremy Corbyn’s associations.

We – because I was one of that motley group of voices – were accused of accusing Jeremy of being antisemitic. But the truth is, I wasn’t accusing him of that. I don’t know many who were. My accusation – which ties into the “Why?” here – was a lot more simple. We were concerned that he didn’t know what antisemitism was. He didn’t acknowledge its existence when it came from sources he viewed as “progressive”. To him, antisemitism is Mosley marching through Cable Street.

Such a blindness may be excusable in any human being – it can mark you out as ignorant, or a naive holy fool rather than malign. It’s a flaw in an elected politician. It shows lack of judgement to a serious degree.

And it’s a huge flaw in an elected politician who has made as his foreign policy cause the one area that (as well as the decent and honest, or – as Anthony Julius describes them in his “Trials of the Diaspora” – the rational enemies of Israel – IE/ those who have a legitimate connection to the conflict and have cause to be *on the other side*) lures in Jew haters of all stripes. If you want justice for Palestine to be attainable, you have to put a firewall between the racists and the cause. Both as a moral consideration and as a tactical one.

But, as the stories show and the above illustrates, Jeremy isn’t very good at recognising that.

Again, this wouldn’t be a huge issue. All political parties have their outliers, their cranks and seers, their wild-eyed men of the back-benches, their awkward squad with awkward associations and awkward views.

But what is infuriating, for me, is that on being told of this, the Labour Party members dismissed or glossed over it. Ignored it or pretended it wasn’t an issue. And elected him. Made the decision that it’s support of Corbyn’s economic proposals could override any other considerations.

Today, there’s a protest march in Manchester. The usual assembly of union members and fringe groups are there, proclaiming a message that I in large part agree with. Protesting cuts and talking about public service. 13 year old Morgan is there with this banner: 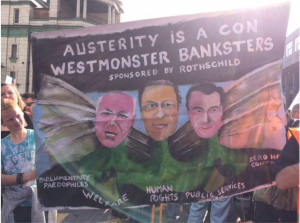 What strikes me most about this is not Morgan. Look, he’s a 13 year old boy with silly reductionist ideas of the world. Fine. We were all stupid at 13. But he made this banner. His parents watched and let him. And let him leave the house. People are helping him carry it. People are standing around it. Nobody is saying to him “HANG ON, Rothschild bankers? LAD!”.

Excuse it all you like. Until the left accepts that it glosses over antisemitism in its ranks, that it turns a blind eye, or makes some hand-waving justification, until the left wakes up to this shit, then it betrays the morals that it claims to stand for.