I don’t watch the programme so have no opinion as to whether the judges made the correct decision in sending Flora home. Here’s Amanda Platell’s take on the result in the Daily Mail.

When this series of The Great British Bake Off began, the BBC was proud it was the most inclusive, multi-cultural line-up ever.

Perhaps if she’d made a chocolate mosque, she’d have stood a better chance.

A glance at Twitter suggests that quite a few thought Ian should have gone instead – Ian, who could only be shoehorned into Platell’s ‘multi-cultural’ moan by being labelled a ‘New Man’.

I thought the best response to Platell’s stupid final remark came from the Telegraph’s Michael Deacon. 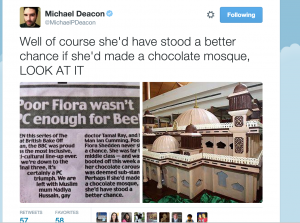