I’ve received yet another “Fellow Conservative” email, this one from Republican Congressman Paul Gosar of Arizona. 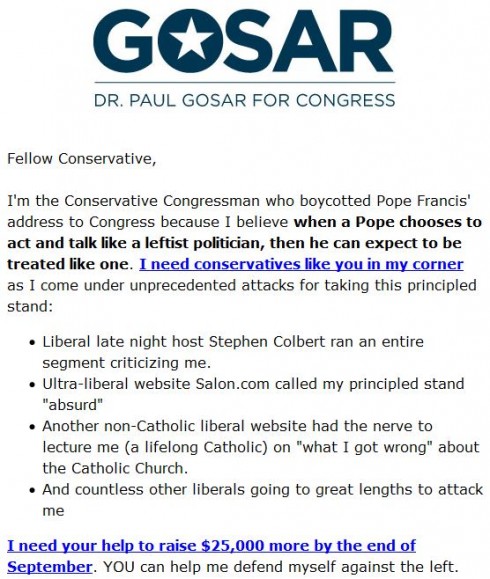 I wonder if he’s feeling a little foolish since the news came out that Pope Francis met privately with Kim Davis, the county clerk in Kentucky who was briefly jailed after she refused to comply with a federal court order to issue marriage licenses to same-sex couples– a stance applauded by many on the Republican right.

On Tuesday night, her lawyer, Mathew D. Staver, said that Ms. Davis and her husband, Joe, were sneaked into the Vatican Embassy by car on Thursday afternoon. Francis gave her rosaries and told her to “stay strong,” the lawyer said. The couple met for about 15 minutes with the pope, who was accompanied by security guards, aides and photographers.

“I put my hand out and he reached and he grabbed it, and I hugged him and he hugged me,” Ms. Davis said Wednesday in an interview with ABC News. ‘Thank you for your courage.’”

So Francis is a conservative on abortion and same-sex marriage and something of a lefty on economic inequality and climate change? Not exactly a shocker. 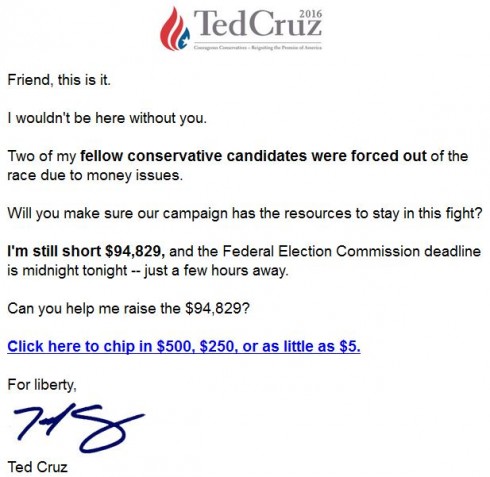 Do they think I’m made of money?