Speaking of racism, as we were in the previous post, today a writer for Glenn Greenwald’s The Intercept website called Daily Beast columnist Maajid Nawaz … a “talking monkey. 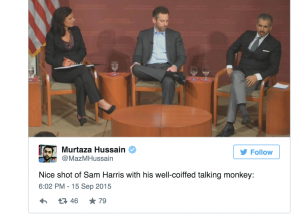 Some of Hussain’s readers reacted with surprise and outrage… 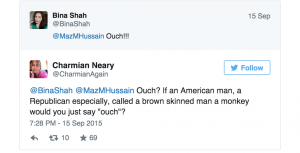 And at that point, Hussain doubled down and used an even more offensive racial slur 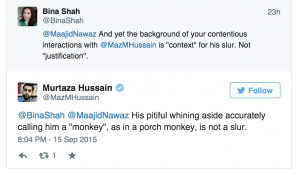 Then he tripled down:

If Hussain worked for any other publication, this could very well get him fired. But the Greenwald crew is well-known for their double standards and hypocritical viciousness, so it’s very unlikely Hussain will even be reprimanded for using a noxious racial slur to smear one of his political enemies.

(Note that I have real differences with Sam Harris and Quilliam — the group Nawaz is affiliated with — and their approach to Islam, but that’s beside the point here. This kind of rhetoric has no place in any discussion, and especially not from a publication that purports to be anti-racist.)