One of her most fascinating chapters, “Border Crossings and Border Enforcement,” delves into the little-​known but remarkable stories of how tens of thousands of Chinese and Japanese found ways into the United States despite being legally barred from immigrating. During what Lee calls an “exclusion era,” which began with the Chinese Exclusion Act of 1882, intrepid emigrants would hide in rail cars crossing in from Canada and Mexico or stow away on boats from Cuba and Jamaica. Trafficking Asians into the United States became a lucrative, multiethnic affair for numerous Greek, Italian, indigenous Canadian and Mexican smugglers. Some went so far as to disguise their clients as other races to throw off border agents. Lee cites a 1904 Buffalo newspaper story on how traffickers along the Canadian border routinely disguised Chinese as Native Americans, “dressed in ‘Indian garb’ and carrying baskets of ­sassafras.”

Importantly, Lee notes that as the “first immigrants to be excluded from the United States, Asians became the first undocumented immigrants”; as such, they were also the target of the first of many national panics around so-called illegal immigration. Government officials in the 1900s designated special deportation agents as “Chinese catchers,” while lawmakers in the 1920s bemoaned how even an imagined “Chinese wall” along the Mexico border would fail to “permit a permanent solution.”

The Chinese Exclusion Act, which barred immigration to the US by Chinese laborers (in effect virtually all Chinese), was approved by Congress and signed by President Chester Arthur less than two decades after Chinese laborers completed almost all of the work on the westernmost stretch of the Transcontinental Railroad.

Cartoons of this nature were typical in the American press: 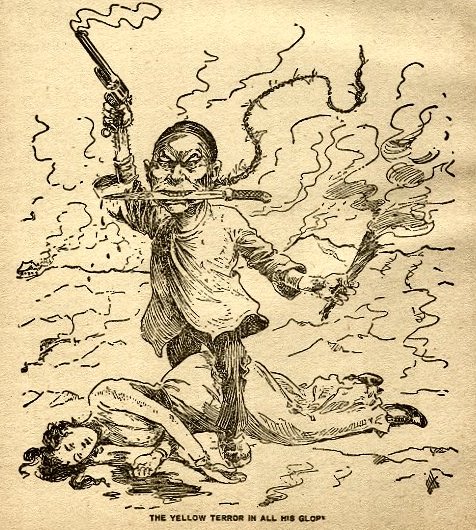 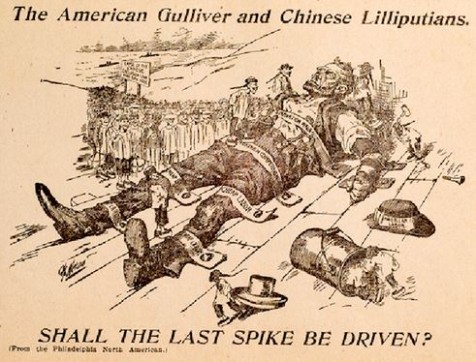 Another all-too-familiar sounding part of American history (with which Donald Trump may or may not be familiar) was the mass “repatriation” of Mexican-Americans, including US citizens, to Mexico during the Depression of the 1930s– during the presidencies of both Republican Herbert Hoover and Democrat Franklin D. Roosevelt.