You will have seen the news.

Jeremy Corbyn opted to stand in silence during the singing of the national anthem at a service to mark the 75th anniversary of the Battle of Britain.
…
A spokesman for Mr Corbyn said: “Jeremy attended today’s event to show respect for those who fought in conflicts for Britain.

“As he said in the words issued this morning, the heroism of the Royal Air Force in the Battle of Britain is something to which we all owe an enormous debt of gratitude. He stood in respectful silence during the anthem.”

His decision attracted attention on social media, and Sir Nicholas said it had been “very disrespectful to the Battle of Britain pilots who gave their all”.

“I think he needs to make his mind up whether he is a grown-up or not,” he said. 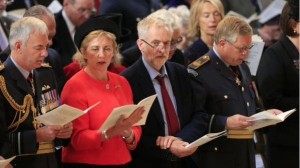 I’m not very worked up about this, personally. I prefer my patriotism quietly determined. Deeds, not anthems.

But that is a decidedly minority opinion and Mr Corbyn’s many misdeeds are well known now.

What the country makes of his antics today – even if Mr Corbyn had had a sterling record before darkening St Paul’s doors – is another matter entirely. He was mad to do this. Never mind all of us scribblers, it seems that the man will undo himself on his own.

Oh let’s have another song, with handy translations for some of Mr Corbyn’s friends.

God bless you boys. No you will never be forgotten.