Many senior Labour figures have clearly signalled their unwillingness to serve in Shadow Cabinet under Corbyn’s leadership. However Ivan Lewis, who has criticised Jeremy Corbyn, was willing to continue in his Northern Ireland role. 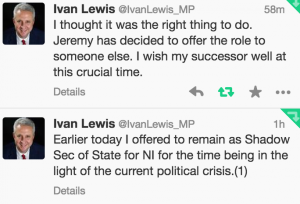 Some of the responses to this news have been both gleeful and unedifying.  This tweeter seems unaware of recent events in Stormont.

Others, including Corbyn supporters, have condemned such comments.  But – given the situation in Northern Ireland and the fact that there isn’t an unlimited pool of willing and experienced Shadow Cabinet Ministers at present – it seems a great pity that Ivan Lewis’s offer to stay on was rebuffed.