Many readers will recall the vicious hatred of Israel displayed in London during the Gaza war of 2008-2009.

It didn’t put Jeremy Corbyn off, that’s for sure. He was a frequent speaker at the violent demonstrations, alongside odious figures such as George Galloway and Yvonne Ridley.

Taking part in the demonstrations was not enough for Corbyn. In the aftermath, when the police rightly cracked down on the thugs who had been attacking them and destroying property, he stepped in to help.

Watch him here complaining bitterly about the arrest and prosecution of young men who were simply “angry”, demanding an enquiry into the whole judicial process, and making the inflammatory and baseless claim that the aim of the arrests was to “deter anyone from going on demonstrations”.

Corbyn also held a meeting in Parliament for the thugs, stirring up hatred with more blatant lies.

This week the families of those sentenced, the vast majority of whom are Muslim, met lawyers and MPs at the Commons to set out their concerns.

Jeremy Corbyn, the Labour MP for Islington North who chaired the meeting, said that the sentences amounted to an attack on the Muslim community and the right to protest.

Fellow speakers
advertised for that parliamentary event included Galloway and Islamist agitators Anas al-Tikriti and Daud Abdullah. Only the worst will do for Corbyn, as ever.

Here he is teaming up with Galloway at another event. This time it was a demonstration for the thugs at the Home Office in March 2010. 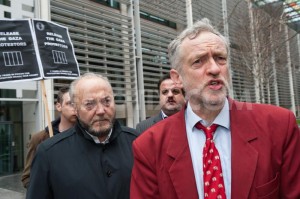 Now look at what Corbyn and his friends were defending. It is simply awful.

At least one of the rioters moved on to something rather more serious.

A British Muslim has been killed fighting against Bashar al-Assad’s forces in Syria, his family in London have said.

Mohammed el-Araj, who was in his early twenties, is only the second Briton to have been named and confirmed as dead while fighting in the civil war. Araj, who spent 18 months in prison for violently protesting outside the Israeli embassy in London in 2009, was killed in Syria in mid-August.

This what the CST had to say when the London convictions were coming thick and fast. It was spot on.

A spokesman for the Community Security Trust said: “The level of violence on the anti-Israel demonstrations was completely unacceptable and, combined with the record number of antisemitic incidents last January, caused genuine fear amongst the Jewish community.

“The right to demonstrate is important but should not be abused in this way, and we applaud the work of the police and the courts to identify and convict those who broke the law.”

Corbyn couldn’t care less. For him, the right kind of thug is not an unwelcome threat best left to the police and the courts. No, he is a noble cause.