In response to a request for a Dress Down post on this topic – I invite readers to make predictions about the composition of the future leader of Her Majesty’s Most Loyal Opposition’s shadow cabinet.  I also invite speculations about the content of Prime Minister Corbyn’s first Queen’s Speech.

Of course there has already been much coverage of who might be invited (that promise to bring back shadow cabinet elections seems to have been ditched) to serve under Corbyn.  As more than one commenter has pointed out, it’s difficult to be sure which suggestions are serious, which intended as a joke.  John McDonnell, widely tipped for a senior role, has declared:

“It’s about time we started honouring those people involved in the armed struggle. It was the bombs and bullets and sacrifice made by the likes of Bobby Sands that brought Britain to the negotiating table. The peace we have now is due to the action of the IRA.”

Corbyn has earnestly asserted the importance of listening to ordinary Labour members:

He previously told the Independent: “I will absolutely use our supporters to push our agenda up to the parliamentary party and get them to follow that. We have to encourage the parliamentary Labour party to be part of that process and not to stand in the way of democratising the party and empowering the party members. It is going to be an interesting discussion.”

This is how new Labour MP Kate Osamor, another Shadow Cabinet hopeful, interprets the process of democratisation when engaging with Labour members: 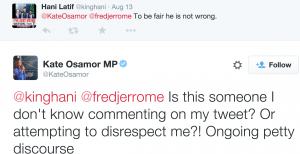