If nothing else makes Jeremy Corbyn’s leftwing supporters think twice about electing him as Labour party leader, perhaps this will:

Jeremy Corbyn could champion women-only train carriages to curb sexual violence should he be elected Labour leader. The Islington North MP made the suggestion on Tuesday evening during the launch of his street harassment policy.

But why stop there? Why not provide segregated seating for women in public meetings, theaters, classrooms, etc. In fact why not designate certain sidewalks for women only? The possible ways to prevent sexual harassment are endless.

Without dismissing the real problem of violence and harassment against women, Yvette Cooper gets this one right:

Just got off tube. Majority of passengers women. Why should we have to shut ourselves away to stay safe? Stop #VAWG instead #segregation

Update: The Independent almost compensates for publishing Robert Fisk’s latest column (suggesting without evidence that Israel has some sort of understanding with the Islamic State) by running this cartoon: 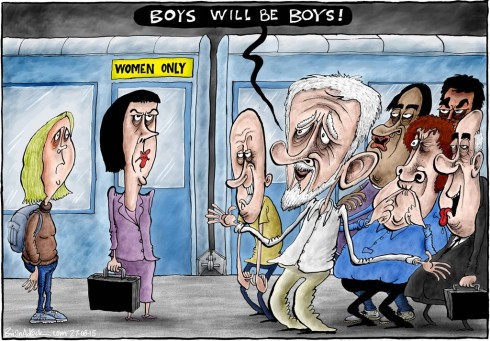 Bleak Election Day in the UK

A fortune cookie for 2020. Part 1: LibDems – misreading the tealeaves